It has become common practice in art historical scholarship to interpret Western still life painting under the aspect of transience. This tendency, however, has obscured our view of the various pictorial solutions and types of representation encompassed within the genre, with the result that the subgenre of Vanitas still life itself has been neglected. This article aims to reconsider and reassess Vanitas still life by studying the origins and historical contexts that significantly influenced the genre. It starts with a close examination of the meditatio mortis of Saint Jerome who, from the 14th century onwards, enjoyed increasing popularity because his teachings corresponded most closely to humanism and a changed theology of piety. As translator and exegete of Ecclesiastes, the Church Father embodied the model of a new scholarly view of death in which mortality was understood not as punishment but as human condition and, thus, became the object of individual reflection. A decisive turning point in the relationship between Hieronymus imagery and autonomous Vanitas still life, so will be further argued, then occurred in the middle of the 16th century when the Protestant-Calvinist movement, especially in the university city of Leiden, began to take an increasingly critical look at the Hebrew original text of the Bible and its translations and commentaries. Discussions of these texts certainly included the Book of Ecclesiastes and the term hæbæl (“breath of wind”, “(blown) breath/air”, “steam”, “breath”), which serves as a leitmotif there. This term, which is so complex and meaningful in its pictoriality and semantics, found its way into the new genre of Vanitas still life emerging in Leiden around 1600. As will be shown, it is inherent in (or rather underlies) the new genre, which needs to be understood as a speculative pictorial form. 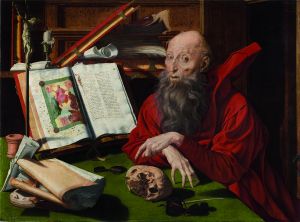