On a Walkway to Hell

Vantages on Art and Life's Exhaustion

In this article the widespread phenomenon of neoliberal institutions’ production of architectural vantages, windows or walkways onto working artists or “creatives” is subjected to a double analysis. On the one hand, the spectacularised views are read as an outcome of art’s own “corporealisation” or becoming body, and neo-avant-garde movements’ development of life performances. On the other, the resources of biopolitical theory are used to critique the separation of the artist’s appearance from their own powers of self-affection fixing them as a creative yet static “form of life” within these views. This phenomenon, by which the artist’s bare life is rendered creative in itself, is read in relation to the figure of homo economicus whose innate competitiveness is given a biological grounding. Finally, the article compares the fixing of creative life as spectacle to capitalist biotech’s enclosure of life’s innate generativity in the interest of producing speculative and commodified lifeforms and to the detriment of existing life. 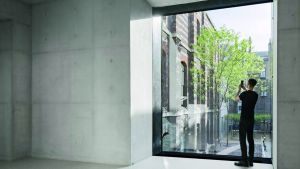