In contrast to other cultures, European Christian civilization tends to have negative emotions towards the bat, which is now suspected of having caused the Coronavirus pandemic as a virus carrier. The bat has unusual properties, which have been noticed by naturalists since ancient times: It is the only flying mammal, no other animal lives in such large groups so close together, and it navigates in the dark. Although its negative interpretation in Christianity is rooted in the Bible, it is only from ca. 1280 that it appears in art often entangled with devils and demons. The current article focuses on texts and images, especially in book illumination, in which a positive or neutral view of the animal can be found. Of particular interest is the bat in pharmacopoeia and its appearance in Italian herbaria of the fourteenth century. 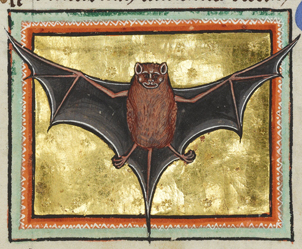