From the perspective of political iconography, this article takes a rather unusual view on a group of graphic works by the German secessionist Lovis Corinth. Martin Luther, whom Corinth honored in an extensive graphic cycle in 1921, is a figure in German religious and national history who played a significant role as a paragon of manliness in the formation of the German nation-state. As the epitome of the German man who stood out for his firmness of faith, steadfastness, and will to fight, Luther was also a suitable model for Corinth himself, who wished for a better reality, especially in the disastrous situation after the First World War. 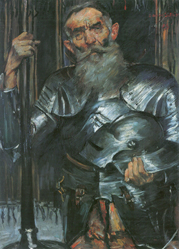