Attention and Distraction: On the Aesthetic Experience of Video Installation Art

This article aims to examine the interrelationship between attention and distraction in the reception of video installation art, a genre which is commonly associated with "immersion" and an intensified feeling of presence in the discourses on new media art and installation art. This tends to veil the fact that the behaviour of many visitors is characterised by a certain restlessness and distraction. The article suggests that, in contradistinction to traditional disciplines of art like painting and sculpture, video installations seem to stimulate a "reception in distraction" (Walter Benjamin) that is at odds with the ideal of a reception in concentration that governs the institutions of fine art as well as aesthetic theory. It intends to demonstrate how the experience of video installation art can only be understood by recognising that the close connections between, on the one hand, video art and, on the other hand, the cultural formations of television, film and computers have fundamentally re-configured "aesthetic experience."

Questioning the Social Conventions of Spectatorship

A New Model of Environmental Spectatorship?

Reception in a state of distraction, which is increasing noticeably in all fields of art and is symptomatic of profound changes in apperception, finds in the film its true means of exercise.1

At a time when the farthermost corner of the globe has been conquered by technology and opened to economic exploitation; when any incident whatever, regardless of where or when it occurs, can be communicated to the rest of the world at any desired speed [...] when time has ceased to be anything other than velocity, instantaneousness, and simultaneity, and time as history has vanished from the lives of all peoples; when a boxer is regarded as a nation's great man; when mass meetings attended by millions are looked on as a triumph – then, yes then, through all this turmoil, a question still haunts us like a specter: What for? – Whither? – And what then?17

[…] successful reception in distraction presupposes that a mastery of certain tasks has become habitual. What is at stake here, it would seem, is a dialectical mode of reading that effectively masters the technological apparatus – as the film actor masters the recording devices on the set – with the aid of the apparatus itself.25

Questioning the Social Conventions of Spectatorship

When I watch television, I exist at the intersection: 1. of a perceptual fascination provoked by the screen's luminous animation which borders on the hypnotic, 2. of a captive relation with the narrative content of the program, associated with a lateral awareness of surrounding events (water boiling on the stove, a child's cry, the telephone …), 3. of a world of phantasms occupying my daydreams.27 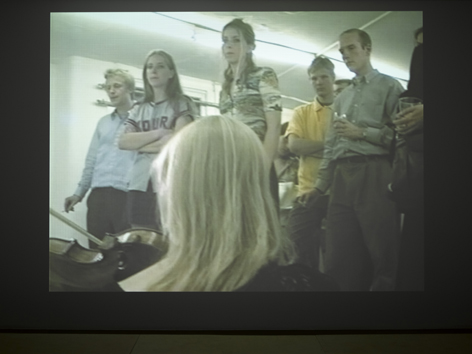 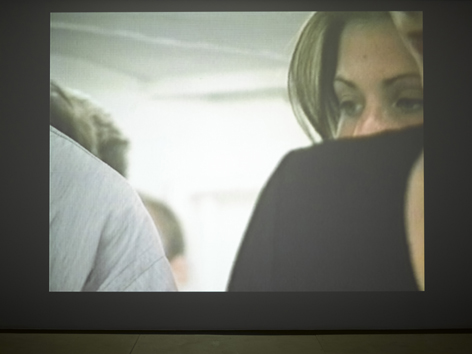 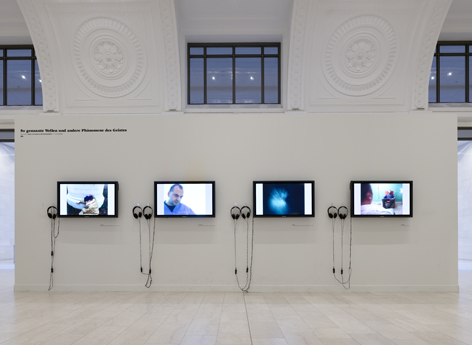 A New Model of Environmental Spectatorship?

We must begin to understand the strange kind of dislocations and associations that now constitute subjective reality. Unavoidably, our lives are divided between two essentially incompatible milieus; on one hand, the spaceless electronic worlds of contemporary technological culture and, on the other, the physical extensive terrain on which our bodies are situated. Much installation art affirms that experience (and art) is constituted out of the paradoxes and discontinuities of this mixed heterogeneous zone.39

2 As always, you should be aware of the variations that underlie such general observations. The level of distraction among visitors is of course not only dependent on the works themselves but also on their surroundings, i.e. the character of the institutional site (museum/gallery), the size of the exhibition and the curatorial set-up. In a small exhibition comprising only a few video works, visitors are more liable to give a fair amount of concentrated attention to (some of) the works whereas large exhibitions – e.g. biennials and mixed mega-shows of contemporary art – will usually increase the distracted behaviour.

5 Mark Hansen, "Ubiquitous Sensation: Towards an Atmospheric, Collective, and Microtemporal Model of Media," in: Throughout: Art and Culture Emerging with Ubiquitous Computing, ed. Ulrik Ekman, Cambridge, Mass., forthcoming 2011. The term embedded computing refers to a present development in which computing seems to be moving on from existing primarily as discrete units (e.g. personal computers) so as to be pervasively and sometimes invisibly integrated in our living and working environments. The term context-awareness correlates with notions of embedded computing and mobile computing (like the GPS and the cell phone). It is used to characterize devices that are aware of the contexts in which they are run and can sense as well as react to their environment. Thus, context-aware systems are capable of interacting with other devices and applications as well as with the (changing) environment and (mobile) human users.

8 The terms ubiquitous computing and pervasive computing are nodal points, i.e. key concepts, in the discourse on the possible spread of computer technology throughout the urban environment and to all aspects of people's life world. By some computer theoreticians "ubicomp" is claimed to be the primary characteristic of a third epoch of computing (after the mainframe and the personal computer). Whether computing is actually moving towards such global diffusion and penetration or the notion of "ubicomp" is just a techno-optismistic/techno-fobic vision is at present hotly debated.

9 For an introduction to the problematics of ubiquitous computing, see: Ekman's "Introduction".

10 See Hansen's discussion of the microimpact of ubicomp on human perception in Hansen, "Ubiquitous Sensation".

15 My presentation of Wolfgang Staehle's installation is indebted to Mark Hansen's thought-provoking analysis of this work in his keynote address "Time's Obsolescence (or the Irreducible Technicity of Temporalization)" at the conference "Erlebnis and Erfahrung. Aesthetics of Pervasiveness," held at the University of Copenhagen, 6-7 November 2007.

17 Quoted in Alan Moore, "History Asks, 'What Then?'." I am indebted to Wolfgang Staehle for drawing my attention to the Heidegger quotation in the exhibition.

20 Patrice Petro, "After Shock/Between Boredom and History," in: Fugitive Images. From Photography to Video, ed. Patrice Petro, Bloomington and Indianapolis 1995, 270.

24 Crary, Suspensions of Perception; Petro, "After Shock/between Boredom and History".

38 I am referring to the way the work was installed at the exhibition Reality Check, Statens Museum for Kunst (The National Gallery), Copenhagen 2008.

40 Marita Sturken, "Paradox in the Evolution of an Art Form: Great Expectations and the Making of a History," in: Illuminating Video. An Essential Guide to Video Art, eds. Stuart Hall and Sally Jo Fifer, New York 1990, 101-25, here 108.