Similarly with the progressive turn from magic to sciences, architecture underwent a slow transformation starting with the last decades of the 17th century. Inevitably, the increase in rationality provoked the loss of the mythical component that still infused the Early Modern architectural theory. Carlo Lodoli's thought plays an important part in this process, as it carries forth the questioning of the authority of ancient knowledge, practice and aesthetics, while emphasizing the ethical function of architecture. This paper is an attempt to see Lodoli's theory through the lens of the coeval scientific achievements, while presenting him as an actor of the architectural crisis at the end of classical modernity.

Two Books in Search of an Author 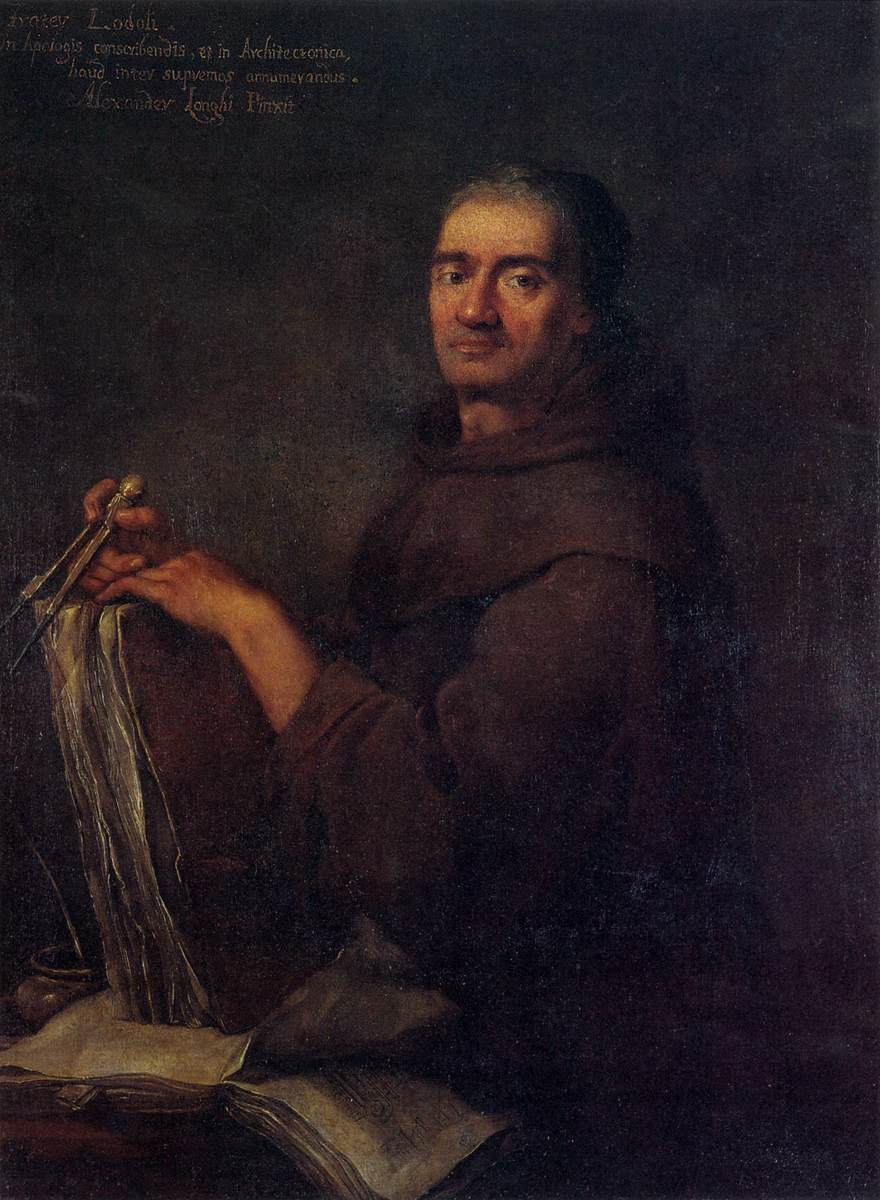 Two Books in Search of an Author 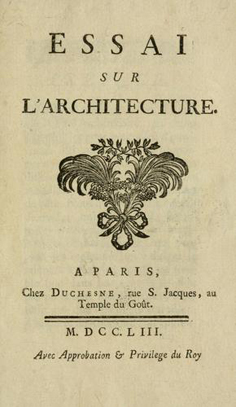 Francis HASKELL, Patrons and Painters. A Study in the Relations Between Italian Art and Society in the Age of the Baroque, Chatto & Windus, London, 1963.

John HENRY, "Science and the Coming of the Enlightenment", in Martin Fitzpatrick & alii (Eds.), The Enlightenment World, Routledge, London, 2004, pp. 10-26.

Emil KAUFMANN, "At an Eighteenth Century Crossroads: Algarotti vs. Lodoli", in The Journal of the American Society of Architectural Historians, Vol. 4, No. 2, April, 1944.

Terence M. RUSSELL, Architecture in the Encyclopédie of Diderot and d'Alembert, with the collaboration of Ann-Marie Ashworth, Scolar Press, Aldershot, 1993.

David SMITH CAPON, The Vitruvian Fallacy. A History of the Categories in Architecture and Philosophy, John Wiley & Sons, Chichester, 1999.

* For reading this paper and for support I would like to express my gratitude to Prof. Anca Oroveanu (New Europe College and the National University of Arts, Bucharest), Prof. Susanna Pasquali (University of Ferrara), Mrs. Ioana Vlasiu (George Oprescu Institute of Art History, Bucharest), and Prof. Hubertus Kohle (Ludwig-Maximilians-Universität, München).

1 The encyclopedic enterprise was initiated by André François Le Breton in 1743, at first as a French rendering of Ephrahim Chambers' Cyclopedia, published in 1728. Once Diderot and D'Alembert joined the editorial board, the structure of this ambitious and erudite work was radically modified; the new Encyclopedia was to assimilate the Cartesian rigor, and the principles of English empiricism. In this matter confer Mallgrave 2005, p. 14; Calatrava Escobar 1992, passim; Im Hof 2003, pp. 124-127.

2 The first edition, in 1753, was published under the protection of anonymity. A second, enlarged edition was released in 1755, this time declaring the author's identity, while answering some of the imputations – such as ignorance, error, or plagiarism – proffered in the meantime. Confer Laugier 1755, the chapter "Avertissement sur cette seconde Edition", pp. v-xxxij. Two years later, the book was translated in English and German, reaping a fertile reception and enjoying a large distribution. For this particular aspect confer Hermann 1962, pp. 173-197; Mallgrave 2005, p. 23. – A complete digitized copy of the 1753 edition is available at http://openlibrary.org/books/OL24349583M/Essai_sur_l'architecture.

3 Count Algarotti's text had a certain fame precisely because it was ironically demolishing an unusual theoretical corpus. Since the first edition in 1753, this essay was more than once republished, during its author's life and after his death.

5 A most interesting symptom is the recovery of the Lodolian ideas during the fourth decade of the last century. The proliferation of the studies and essays was mirrored, mainly in the totalitarian countries, by the emergence of a classicizing, yet extremely abstract architecture. Confer Grassi 1966, p. 13; Calligaris 1982b, p. 232; Cellauro 2006, p. 26.

6 Image reproduced from the Web Gallery of Art, http://www.wga.hu/index1.html.

9 Confer Haskell 1963, p. 320. It is a strange fact that the notion of "rigorism", imported into the philosophical vocabulary from theology, had acquired a depreciative meaning both in Venice and France, in the second half of the 18th century. Paradoxically, "rigorism" is gradually perceived as a sort of excess. Confer Rykwert 1980, p. 307.

10 About the obsoleteness of the Vitruvian theoretical system – relying on the somewhat Procrustean dependence on the three main categories and on the correlation between macro- and micro-cosmos, between the human and architectural proportions, but also between the general proportionality and the perfect numeric ratios – one should see Smith Capon 1999, passim and especially pp. 3-32.

11 For the biography, career and role played by Francesco Algarotti, confer Kaufmann 1944, pp. 23-24; Haskell 1963, pp. 347-361. As for Andrea Memmo, confer Haskell 1963, pp. 364-368. About the absence of an specialized professional training as a more general symptom, one should see Cellauro 2006, p. 27. A salient elucidation of the interest in architecture expressed by these polymaths might be their bond with the freemasonry, as suggested by Rykwert 1980, p. 298.

13 His dislike of a system was most relevant: "[...] sistema, parola che il Lodoli non ammetteva mai rispetto a' principj architettonici [...]", Memmo 1833, vol. I, p. 14; Calligaris 1982a, p. 3. Almost all the commentaries on Lodoli mention the association with the Greek philosopher, on the grounds of this passage: "come già Socrate la Filosofia [...] intende di purgar l'Architettura", Algarotti 1784, pp. 8-9.

15 Besides, in 1786 all the major theoretical writings had already appeared. This is the background on which Lodoli is made to play an important post mortem role in the European debate on architecture. Confer Gambuti 1975, p. 130. Still, that Roman edition was incomplete, both volumes being printed only in 1834. After such a discontinuity, the authenticity of the second tome (regarding both Memmo's text and and Lodoli as its prime source) was doubly questioned. Nevertheless, this second edition remains the reference source.

17 It would seem that Algarotti was paraphrasing here one of the major ideas of Lodoli's theory: every material has its own laws on which, in the end, rely both its form and durability. "Niente vi va di più assurdo [...] che una materia non significhi se stessi, ma ne debba significare un'altra." Ibidem, p. 15. This "punitive" dimension of the ruin is in itself meaningful, especially at a time that was starting to appreciate the spectacle more then the calamity of ruination: "Cotesto [the concealing of a material into another] è un porre la maschera, anzi un continuo mentire che tu sai. Dil che gli serepoli, le rovine; quasi una manifesta punizione del torto, che vien fatto del continuo alla verità." Ibidem (my italics). Confer also Cellauro 2006, p. 48.

18 "L'Architettura al contrario dee levarsi in alto coll'inteletto, e derivare un sistema d'imitazione dalle idee delle cose più universali, e più lontane dalla vista dell'uomo." Algarotti 1784, p. 21. Here, the word "imitation" is given a slightly different meaning than that current in the 17th century, be it only because it presupposes a more abstract relationship between the model (in this case the most universal ideas) and the copy.

21 Sambricio 1974, p. 68. One should observe that, paradoxically, the "ancients'" position was defended by the younger combatant. As for the famous argument introduced, during the 17th century, by Charles Perrault, confer Mallgrave 2005, pp. 6-9. A similar attack, this time within the notorious competition between the Greek and Roman ideal, was launched, in 1765, by Giovanni Battista Piranesi (the most spectacular among Lodoli's disciples) in his book Parere su l'Architettura. Cf. Gambuti 1975, pp. 145-148; Kaufmann 1955, p. 315.

22 The presupposition that Lodoli was actually more flexible than he was believed to be, compared for instance with Laugier, has been repeatedly sustained. Confer Hermann 1962, p. 192; Kruft 1988, p. 260. According to Joseph Rykwert, Algarotti presented not only a more acceptable account of the Lodolian theory, but an even more advanced one as well. Confer Rykwert 1980, p. 297. Emil Kaufmann proclaimed Algarotti the first to have recognized the originality of Lodoli's thought. Confer Kaufmann 1955, p. 310.

29 Rykwert 1976, p. 21. About the constant criticism (in Marc-Antoine Laugier's spirit) of those who pretend to remedy the Rococo by returning to a noble classicism, and thus persisting in their error, confer Sambricio 1974, pp. 69-70.

32 The verb fungor engendered, for example, the French fonctionner and the Spanish and Portuguese funcionar. A very erudite analysis on this word's etymology and implications is to be found in Rykwert 1976, p. 22. Thus, in the second volume of his Opera Omnia published in Lausanne in 1742, Jean Bernoulli defines function as "une quantité compsée de quelque manière que ce soit de [...] grandeurs variables et de constantes", apud ibidem.

35 About the attempt to bring scientific principles to bear upon architectural theory, confer Farinati 1996, p. 534. On the Cartesian rationalism, confer Mallgrave 2005, pp. 1-12. For the Enlightenment context, among other sources, confer Im Hof 2003, passim.

37 The works of Montesquieu, with whom Lodoli kept a correspondence, were perceived as highly controversial in the still conservative Venice. Confer Haskell 1963, pp. 320, 326.

41 The theories of statics and strength of materials were applied in France starting with the last two decades of the 17th centuries, the results of such experiments also echoing in Italy. However, in the first half of the 18th century, it was Giovanni Poleni who was interested in analyzing the resistance of certain materials, among which steel, and also in using diverse mechanisms such as the machina divulsoria invented by the Dutch scientist Pieter van Musschenbroeck. Confer Pérez-Gómez 1983, pp. 241-250. See also "Mechanics", in Burns 2003, pp. 189-190.

46 About the Lodolian Cartesianism confer Calligaris 1982b, p. 233. As for an overview of Descartes's natural philosophy as a coherent, all-embracing system, as well as for the relationships and confrontation between Cartesianism and Newtonianism, confer Henry 2004, pp. 10-25, especially pp. 12-15.

60 In fact, Frézier was unconvincingly speculating on a passage found in Vitruvius' treatise. Confer Cellauro 2006, pp. 50-51.

61 The theory developed by Quatremère de Quincy in the last decade of the 18th century and afterwards, beginning with the article "Imitation" published in Encyclopédie méthodique, in 1788, argued the imitative purpose of architecture. Confer Saint Girons 1990, p. 85; Russell 1993, p. 9.

62 Szambien 1998, p. 310. The most significant polemic started in 1683 between Claude Perrault and François Blondel, triggering the famous quarrel between the ancients and the moderns. Vide supra the note 21.

73 Vitruvius, I, i, 1: "[…] his personal service [the architect's] consists in craftsmanship and technology." Confer Vitruvius 1955, pp. 6-7. The second paragraph, "Thus what cannot happen in reality cannot be correctly treated in the imitation", is taken from Vitruvius, IV, ii, 5. Confer ibidem, pp. 216-217. Certainly, one cannot see here a direct translation of the Vitruvian sentence. Still, as Louis Cellauro argued, the word "in veritate", being a direct allusion to truth ("veritas") should be understood as "function", while "in imaginibus" stands for "representation". Confer Cellauro 2006, pp.32, 46-47.

77 An excellent introduction into this matter is to be found in Rossi, 1997.