Peer-review and editing organized by:

In connection with the project of erecting an equestrian statue for King Frederick the Great of Prussia, the Berlin sculptor Johann Gottfried Schadow was in the autumn 1791 sent on a research tour to the three Baltic capitals, Stockholm, St. Petersburg and Copenhagen. Here he studied and discussed similar recent projects with fellow artists, and brought reports back to Berlin on the equestrian statues by Pierre Hubert L'Archevêque and Johan Tobias Sergel (Gustavus Adolphus in Stockholm), by Étienne Maurice Falconet (Peter the Great in St. Petersburg) and by Jacques François Joseph Saly (Frederick V in Copenhagen). Documents not previously published throw new light on the contacts Schadow during these travels established with the Danish painter Nicolai Abildgaard, a contact, it is here argued, that strengthened Schadow's commitment to use a historically accurate, more realistic and less idealised stylistic idiom when depicting great figures from the national past.

Frederick the Great in Copenhagen and Sokrates in Berlin 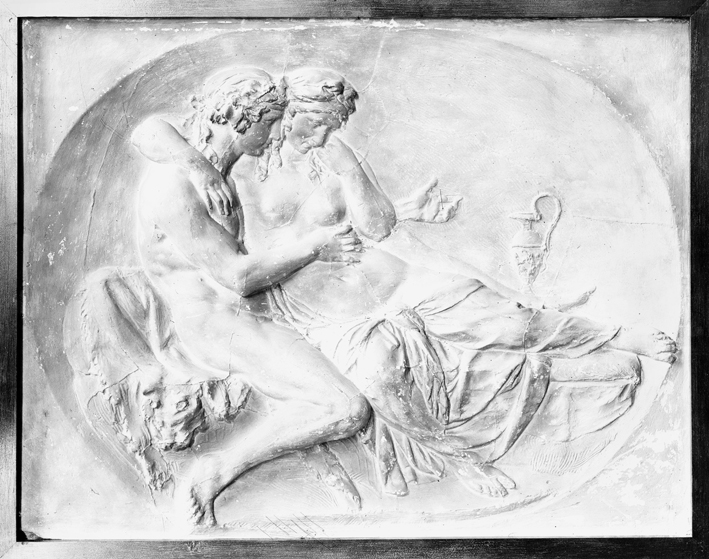 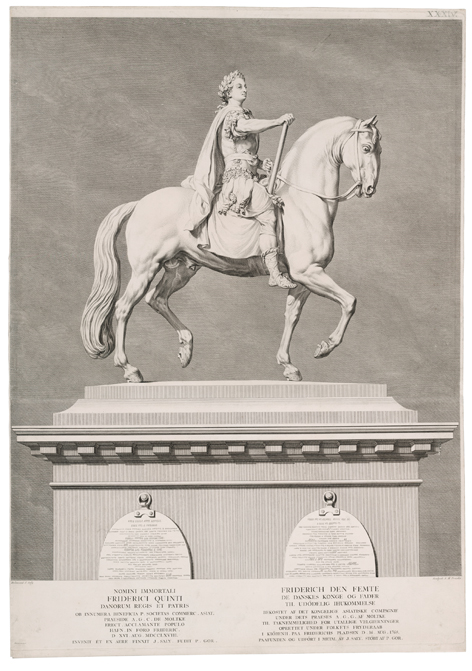 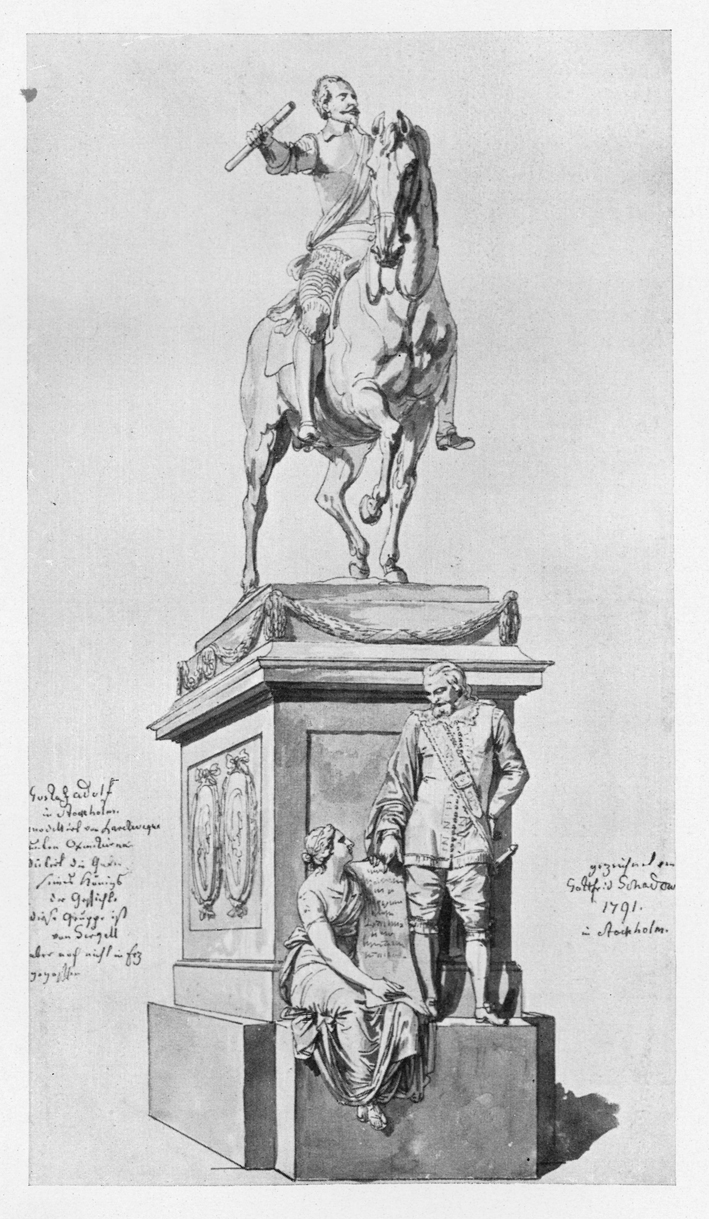 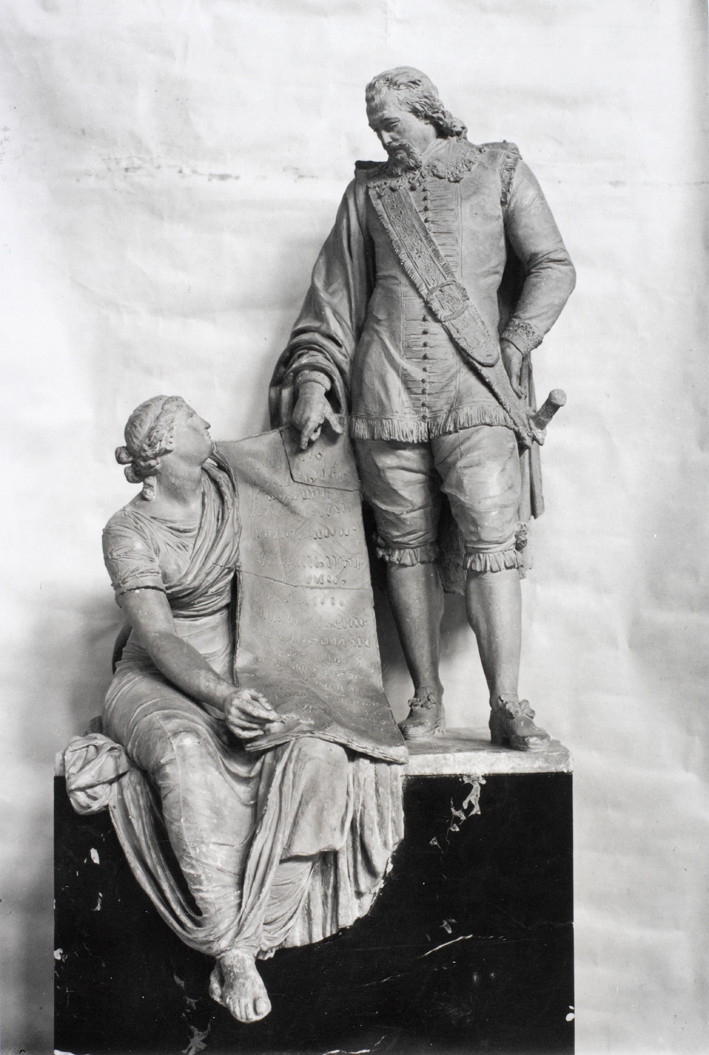 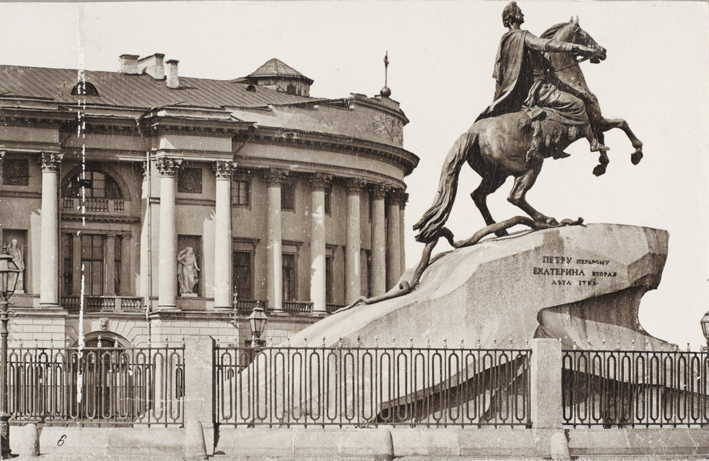 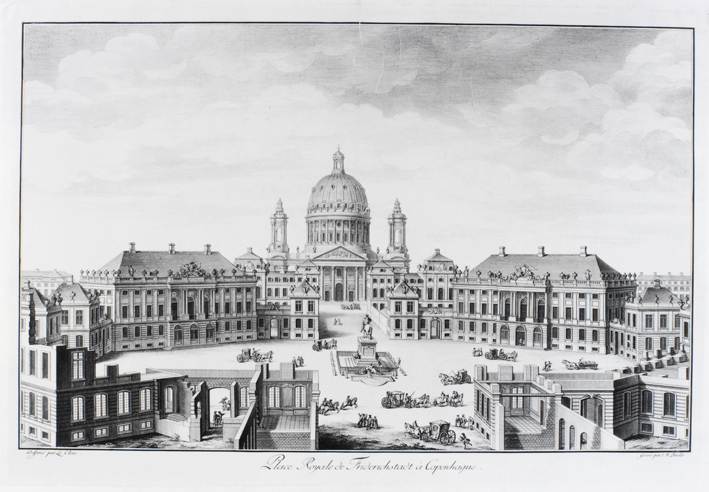 that our painters could have seen your paintings in the Great Hall (i.e. of the Copenhagen royal palace) that proved so well that one can be at least as interesting by using the costume of the modern ages as by using that of antiquity. It (i.e. the modern costume) is closer to and more in harmony with our manners, but it gives perhaps greater problems in treating than the other. 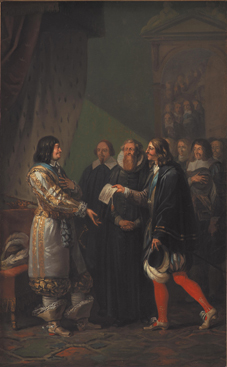 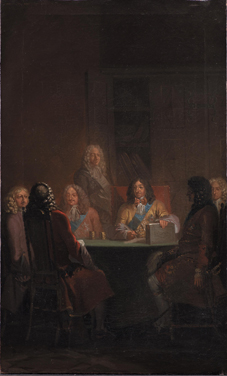 7 a / b Nicolai Abildgaard, King Frederick III receives the representatives of the Danish Estates who recognize the introduction of absolutism (1660) and King Christian V issues the Danish Common Law (1683), 1783 and 1784, oil on canvas, 61 x 37 cm (sketches for the lost paintings in the Great Hall of the royal palace of Christiansborg). Statens Museum for Kunst, Copenhagen, KMS 1139e and f (photograph © Statens Museum for Kunst, Copenhagen)

Frederick the Great in Copenhagen and Sokrates in Berlin 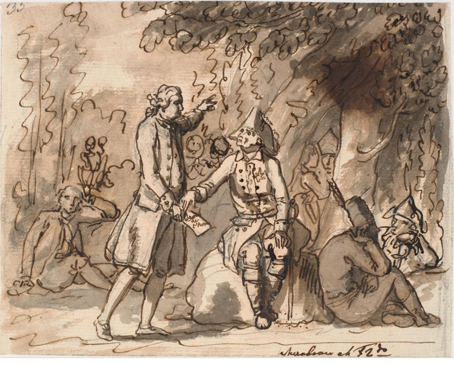 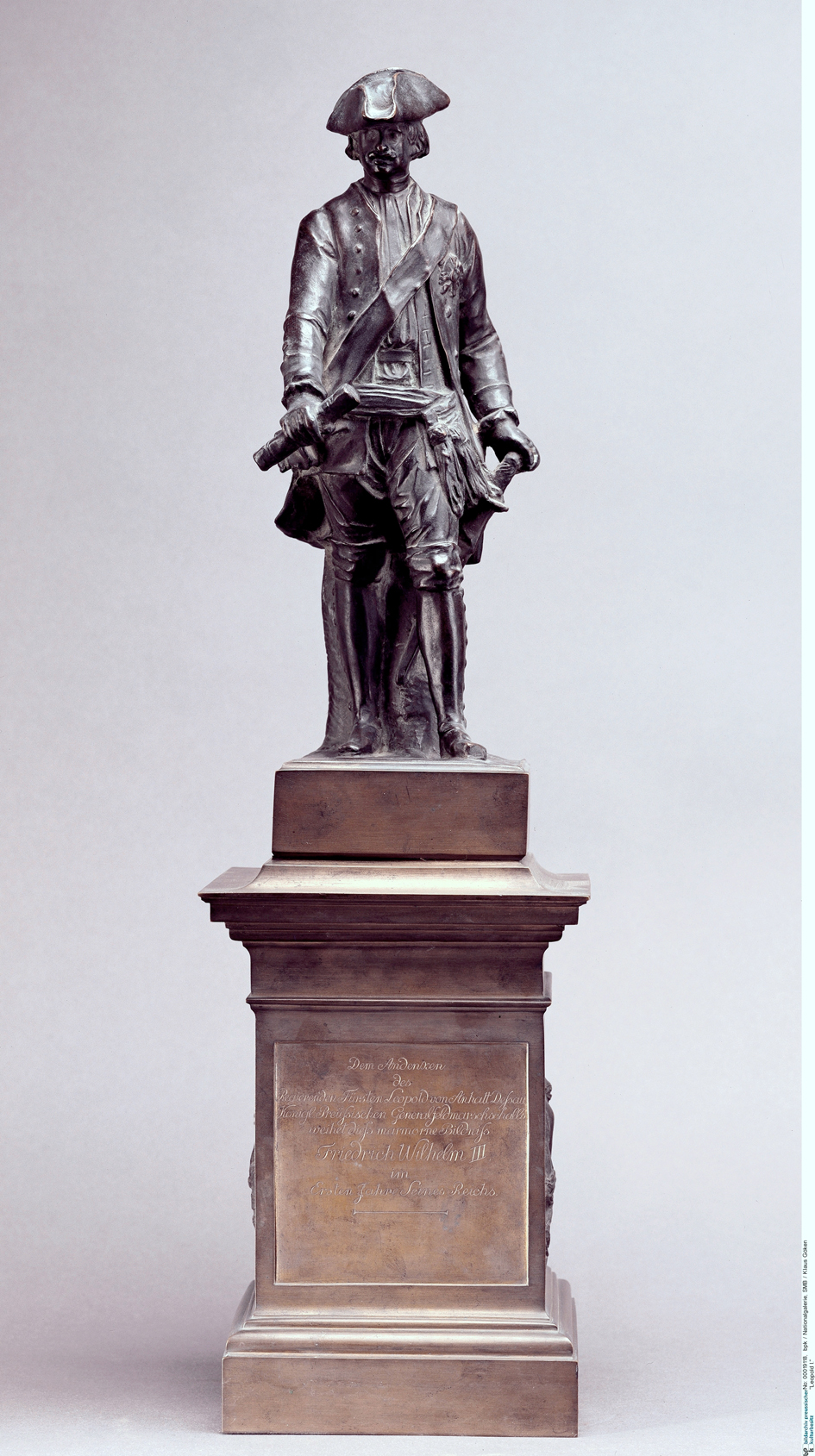 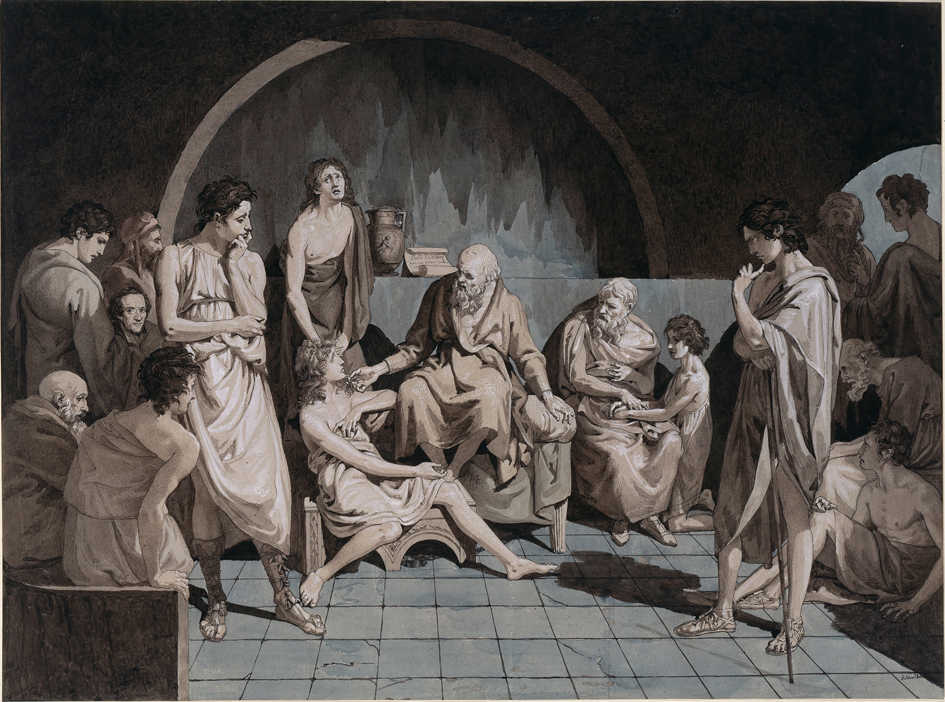 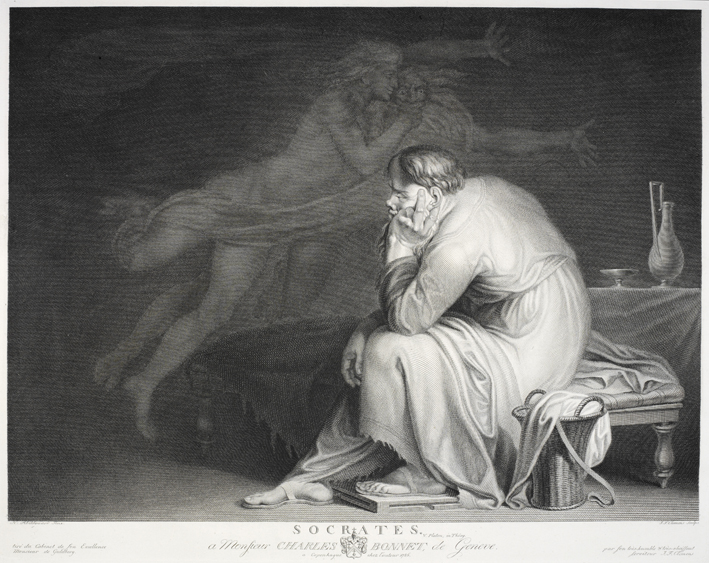 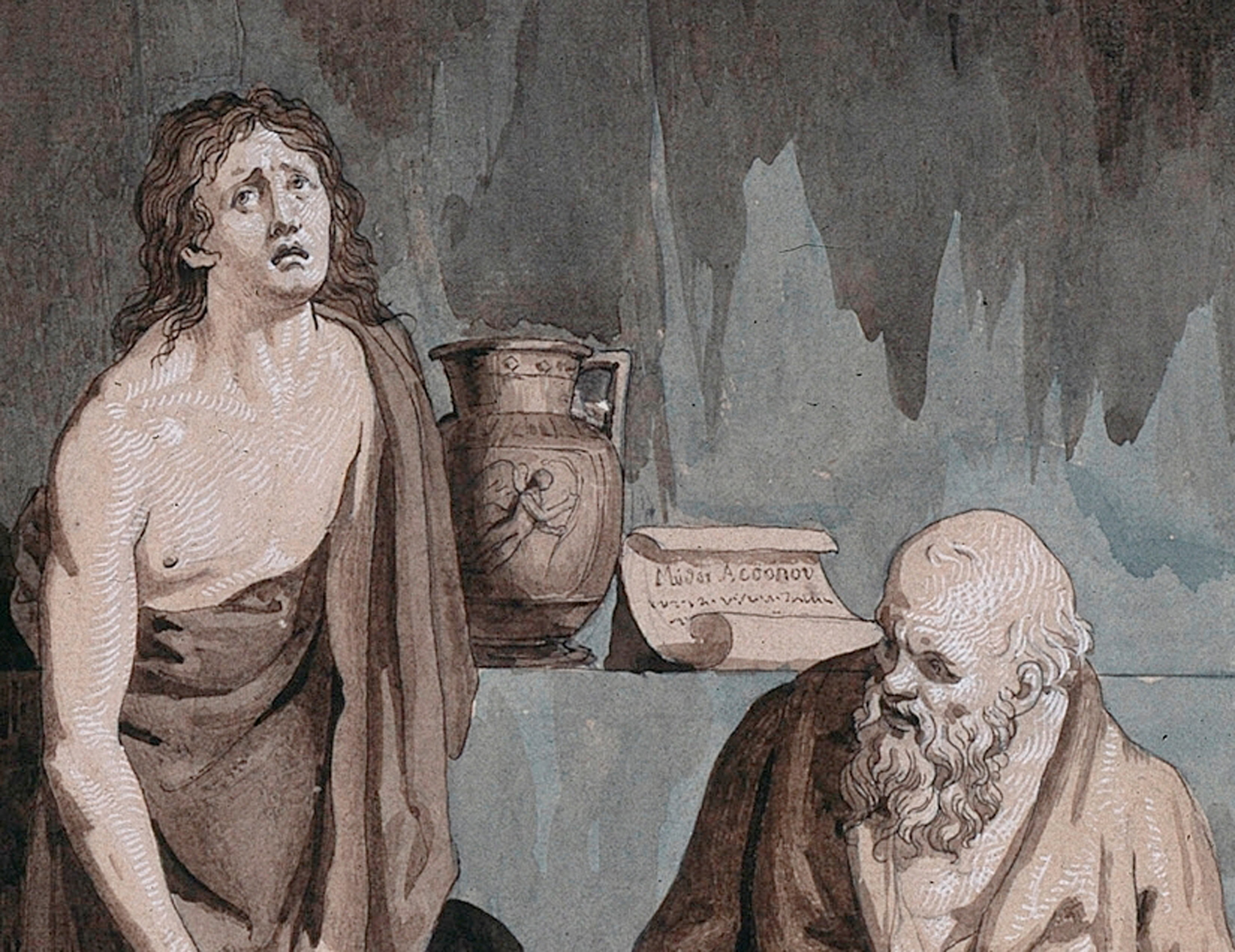 Excerpt from Johann Gottfried Schadow's so-called Ausführlicher Bericht on his travels to Stockholm, St. Petersburg and Copenhagen presented to the Berlin Academy between 8th and 14th January 1792

From his travels to the Nordic capitals, Schadow sent two reports back to Berlin. The first is addressed to von Heinitz and dated 25th October 1791; the original is in the Geheimes Staatsarchiv Preussischer Kulturbesitz, Berlin, I. HA Rep. 76 alt III nr. 381, 162-68; there is a transcription in NL SW 5, Zentralarchiv Staatliche Museen zu Berlin; later, this report was edited anonymously with the title "Ueber die bronzenen Arbeiten zu Stockholm und St. Petersburg," Berlinisches Archiv der Zeit 2 (1797), 213-23.

What matters here is Schadow's second, untitled report that is preserved in two versions in the Geheimes Staatsarchiv Preussischer Kulturbesitz, Berlin:

The document is inedited, but an inaccurate, extensively abridged and, at points, rephrased version based on the transcript NL SW 5, Zentralarchiv Staatliche Museen zu Berlin was edited by Julius Friedländer in 1864 (18902). Friedländer, apparently confusing it with the first report (see above), gave it the partially misleading title "Die bronzenen Arbeiten in Stockholm und St. Petersburg betreffend" and wrongly identified it as a lecture held in late 1791. Friedländer's version is re-edited (in excerpt) by Hohl, Frage des Kostüms (n. 14), 68-70 and in extenso by Helmut Börsch-Supan (ed.), Johann Gottfried Schadow, Kunst-Werke und Kunst-Ansichten 1849: Aufsätze und Briefe, Berlin 1980.

A proper edition of the entire document is a desideratum. Here, an excerpt from the report's final version with the passage (p. 188), where Schadow reports the views of Abildgaard must suffice; the annotation highlights the main differences between this version and the edition of Friedländer:

The letter is in Nicolai Abildgaard's papers, Department of Manuscripts, The Royal Library, Copenhagen, Ny kgl. Samling 2337 4; the central passage on the question of classical versus modern dress is discussed by Kragelund, Abildgaard (n. 38), 291-92; 388-91; the letter is here presented in its entirety.

In the present rendering, the somewhat haphazard punctuation and many characteristic, if incorrect spellings and expressions have been retained. I am indebted to the Head of the Department, Ivan Boserup, for his generous help with deciphering and making sense of the letter.

* I am grateful to the reviewers for helpful suggestions as to the structure of the paper and for saving me from some errors in my transcription of a passage in Schadow's report (Appendix I). Remaining defects are, of course, my own.

4 In a letter from Copenhagen from one "Olsen" to Schadow of 1st May 1792 in Schadow's papers in the Zentralarchiv Staatliche Museen zu Berlin, NL SW 170 Schadow is informed that "Gianelli" (= the Copenhagen Academy's teacher in making casts Domenico Maria Gianelli (1724-1801)), had received "votre bas-relief". Schadow who later produced two marble versions of the Bacchus and Ariadne (Werner Gramberg, "Ein unbekanntes Frühwerk von Johann Gottfried Schadow," in: Jahrbuch der Hamburger Kunstsammlungen 6 (1961), 79-84) was probably sending Gianelli a cast, from which to make copies to be sold from his shop along with the companion piece by Thorvaldsen (I owe this point to discussions with Dr. Emma Salling).

5 Dr. Emma Salling, who is publishing a catalogue raisonné of the art collections of the Royal Danish Academy of Art, kindly informs me that Schadow was elected by the Academy as a foreign member on the 27th December 1791 on the basis of a no longer extant petition as well as on the relief now in the Academy collection: http://www.kulturarv.dk/kid/VisVaerkRefreshTilbage.do?vaerkId=94907. To live up to the Academy statutes, Schadow was further requested to submit a sculpture in the round, and in 1793 sent in a (no longer extant) cast of his Mars.

9 Høyen was in Berlin roughly from 19th till 30th September 1822. In Schadow's Schreib-Kalender auf das Gemein-Jahr 1822 (= NL SW 27, Zentralarchiv Staatliche Museen zu Berlin), there is no reference to a visit, but on the 16th September he is in the evening at his Montag Club, there meeting "H[errn] H. Steffens von Breslau". Heinrich Steffens was a great figure in early Danish Romanticism before becoming professor in Wrocław (then Breslau). It is a fair guess that the professor had arranged for Høyen to be presented to Schadow.

21 "Keine fremde Tracht": for lack of a better alternative (cf. n. 29 and Appendix I), here and in what follows I quote Schadow's report from 1792 on his travels in the edition by Julius Friedländer, ed., "Die bronzenen Arbeiten in Stockholm und St. Petersburg betreffend," in: Gottfried Schadow, Aufsätze und Briefe, Stuttgart 1890, 34-38, at 33; on Vasa, see Cederlund, L'Archevêque, 141-51.

27 Lacher, Nachlass, 44 suggests that the Frederick in question is Frederick V of Denmark (of whom Saly's Copenhagen statue), but the Danish Frederick never went to war. Surely, Sergel is commenting on the problem of the style to adopt for the statue of Frederick the Great.

28 Göthe, Sergel, 203 and Hohl, Frage des Kostüms, 59 saw Sergel as unreservedly in favour of the modern costume. Interestingly, the issue is more complex.

30 Mackowsky, Schadow: Jugend, 279 and Eckardt, Schadow, Kunstwerke, 389 identify the document in the Geheimes Staatsarchiv as the Ausführliche Bericht; I owe Lacher, Nachlass, 2 the reference to its whereabouts.

31 In a letter from one Olsen in Copenhagen to Schadow in Berlin of 1st May 1792 there are greetings from the artists Gianelli, Høyer (whose friendship with Schadow went back to visits to Berlin in 1787-90: Torben Holck Colding, Cornelius Høyer, København 1961, 114-34) and one Capt. Gillberg, probably the Swedish painter Jacob Axel Gillberg (1769-1845). In addition to Harsdorff and Abildgaard he also consulted the old engraver Preisler (n. 42) and was presented to the Prime Minister Count A.P. Bernstorff and the Crown Prince: Johann Gottfried Schadow, Kunst-Werke und Kunst-Ansichten, Berlin 1849, 19-20.

33 Schadow was on the point of leaving Stockholm 28th October 1791; tickets to the (semi-public) Hofball on the 14th November, to which in his memoirs he refers (n. 32), were advertised on 8th November 1791 in the Kiøbenhavns Kongelig allene privilegerede Adresse-Contoirs Efterretninger.

47 In the pamphlet, Nicolai Abildgaard, Nogle Anmærkninger ved det i Aar udkomne Skrift under Titel: Udførlig Revision […] ved Andreas Christian Hviid, København 1786, 42; 51-52 Abildgaard approvingly quotes Falconet's warning against taking the praise of ancient art found in ancient authors at face value, but is at 77-78 highly disapproving of Falconet's criticism of the Marcus Aurelius (which he stresses that Falconet had himself never seen).

48 Abildgaard's pioneering role in illustrating Ossian: M. Macdonald, "Ossian and Art: Scotland into Europe via Rome," in: Howard Gaskill (ed.), The Reception of Ossian in Europe, London 2004, 397-99 (with bibliography); for his illustrations of Shakespeare, see Patrick Kragelund, "Abildgaard, Füssli and the First Shakespeare Paintings outside Britain," in: Zeitschrift für Kunstgeschichte 73 (2010), 237-54.

50 Francisco de Miranda, Colombeia vol. VI, Caracas 1983, 227-28 (reporting his impression of the paintings in his diary the 30th January 1788) claims that the wounded King Christian IV looked "more like a hectic madman [...] than a hero" (más parece un loco frenético [...] que un héroe), the Swedish general Steenbock un caporal and, in another hall of the castle, he took exception to an official portrait of Frederick the Great of Prussia: "with his blue officer's coat […] he looked like a commoner" (con su frac azul [...] parece un burgués); during his Copenhagen visit Miranda was reading Winckelmann's Geschichte der Kunst des Altertums, his enthusiastic comments documenting his preference for the neoclassical aesthetics.

51 For contemporary verdicts on these paintings, see the survey in Kragelund, Abildgaard, 280-98; 332-35; also in Denmark, the preference for the contemporary rather than the classical was widespread: as a reviewer remarked, it made no sense to let "men with whom we have lived be portrayed in marble or in prints as if they had lived two thousand years ago" (Mænd, som vi have levet med, staae og sidde derhen i Marmor og Kobber, som havde de levet for 2000 Aar siden): [anon.], Almindelig Dansk Literatur-Journal 3 (1781-82), 403.

56 For the drawing, see Kragelund, Abildgaard, 87-88 and, above all, Thomas Lederballe in: Howoldt and Gassner, Abildgaard, 138-39, no. 33; the latter rightly points to contemporary descriptions of similar fictive meetings in Elysium of the king and Mirabeau.

58 For the painter's library catalogues and books (many of which since 1810 in the Danish National Art Library) and their importance for understanding Abildgaard's oeuvre, see Kragelund, Abildgaard, 9-120; on their evidence for his interest in the events in France after 1789, see 82-91.

60 For the enthusiastic reception and troubled 19th century history of the group, see Lacher, Prinzessinnengruppe, 116-19 (with extensive bibliography).

66 For the links between Abildgaard's Socrates and enlightenment philosophy, see Patrick Kragelund, "The Church, the Revolution and the Peintre Philosophe," in: Hafnia 9 (1983), 25-65; Kragelund, Abildgaard, 324-28.

67 In this second version Schadow has at this point first omitted and then, above the line, added the reference to Marillier (= Louis Adrien Masreliez (1748-1810)). Friedländer reads Marillier as Morillier.

71 This whole sentence is along with the change of paragraph discarded by Friedländer and subsequent editors.

72 C.F. Harsdorff (1735-99), the period's leading Danish architect. In some of the Berlin projects the statue was situated in a temple, which may explain Schadow's consultation of Harsdorff.

74 The sentence from "Diese Meinung" to "dass" is omitted by Friedländer and subsequent editors.

76 Probably identical with the Giordano Alborghetti (1775-1834), who in 1797 partook in the revolt of Bergamo against Venice and was active in the politics of the Cisalpine Republic (governed from Milan) until the fall of Napoleon; he figures as the dedicatee of an opera libretto Berengario by A. Peracchi with music by Carlo Melara from 1820; from the dedication it emerges that Alborghetti then directed the Teatro Riccardi (now Donizetti) in Bergamo.

77 For the Berlin Academy exhibition of 1800 (that opened on 15th September) King Friedrich Wilhelm III of Prussia (1797-1840) had in 1799 encouraged artists to choose motifs from national history.

81 The marble version of Schadow's Prinzessinnengruppe had been finished for the Berlin Academy exhibition in 1797, but only in 1801 was it installed in a fairly inaccessible corner of the Berlin Schloss.

83 Clemens had in 1796 engraved a portrait by Jens Juel of the Danish Prime Minister Count A.P. Bernstorff.