Collector at the Crossroads

Jan Działyński and the Kórnik Collection of Works of Art in the Second Half of the 19th Century: An Exhibition between the Romantic Spirit of Patriotism and a Modern Scientific Approach

In the second half of the 19th century, a tendency for a scientific approach to collecting became visible in Europe. Collectors established contacts with art experts and art researchers in order to assemble works of high class. A Polish aristocrat, Jan Działyński, presented a collection of works of art in a specially prepared castle room of his family estate in Kórnik. The exhibition of his collection bears features characteristic for a systematic and scientific approach to collecting; nevertheless, certain elements still testify to inspiration in Romantic collecting of national tokens, popular at the beginning of the 19th century in Poland. 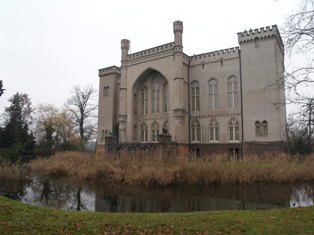 1 Kórnik Castle, view from the park, current condition (photograph provided by the author) 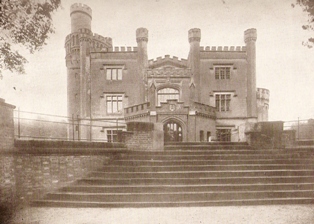 2 Kórnik Castle, view from the entrance, 1913, the photograph derives from the book of Kazimierz Ruciński, Dwory i pałace wielkopolskie, Poznań 1913 (photograph provided by the photographic studio, Institute of Art History of Adam Mickiewicz University in Poznań) 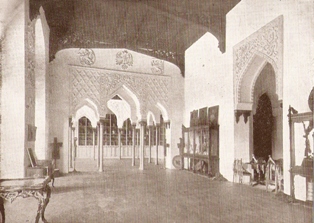 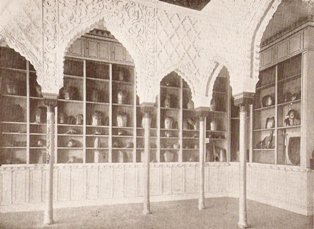 4 Mauritanian Hall, 1st part of the premises, "Armoury", Kórnik Castle 1913, the photograph derives from the book of Kazimierz Ruciński, Dwory i pałace wielkopolskie, Poznań 1913 (photograph provided by the photographic studio, Institute of Art History of Adam Mickiewicz University in Poznań) 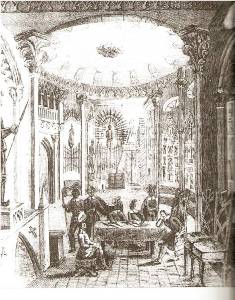 5 Armoury, Palace in Rogalin, drawing according to: Przyjaciel Ludu, 40 (1840) (photograph provided by the photographic studio, Institute of Art History of Adam Mickiewicz University in Poznań) 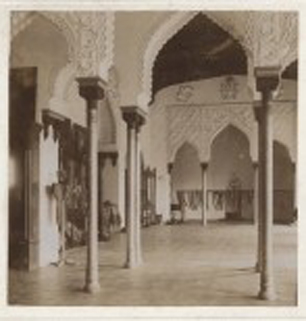 6 Mauritanian Hall, view towards the alcove, 3rd part of the room with sabres hanging on walls attached to a vertical board, Kórnik Castle, 1916, the photograph derives from a book by Zygmunt Celichowski, Zamek kórnicki z objaśnieniami do przeźroczy, Poznań 1916 (photograph provided by the Kórnik Library of the Polish Academy of Sciences) 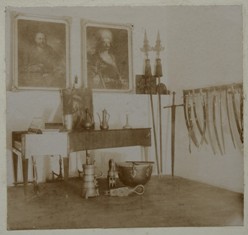 7 Mauritanian Hall, corner with a piano, Kórnik Castle, 1916, the photograph derives from a book by Zygmunt Celichowski, Zamek kórnicki z objaśnieniami do przeźroczy, Poznań 1916 (photograph provided by the Kórnik Library of the Polish Academy of Sciences)

2 Correspondence between Jan Działyński and his family members is preserved in the Kórnik Library of the Polish Academy of Sciences in the Castle in Kórnik and in the Archives of the Czartoryski Princes in the Czartoryski Library in Kórnik. The above quotation derives from a letter from Jan Działyński to his sister Jadwiga née Działyńska Zamoyska of April 1855, BK 07601, k. 195.

3 Jan Działyński became involved in the January Insurrection in 1863, an independent impulse of Poles in the Russian partition aimed at the Russian authorities.

4 Jan Działyński borrowed substantial sums of money from his wife at the time when sequestration was imposed on his estates by the Prussian authorities for participation in the January Insurrection. In 1869, he appealed the decision of the authorities of 1864 and won the process in Berlin. After recovering his estates, he concluded an agreement with Izabella, pursuant to which, he settled his debts by giving her the estate in Gołuchów and the collection of ancient vases.

6 Auction of the Pourtales collection in 1865; a collection belonging to Prince de Blacas in 1866.

8 Działyński's collection, also called the "Gołuchów collection" on account of being taken over and stored by Izabella Działyńska in Gołuchów, apart from the indicated studies of French researchers, was also described in: John Davidson Beazley, Greek vases in Poland, Oxford 1928, Edmund Bulanda and Kazimierz Bulas, Corpus Vasorum Antiquorum. Pologne, Warsaw 1931.

11 The author remembers a meeting with Działyński in Naples, from which it would follow that they became acquainted during the first visit of Jan in Italy. BK 07471, k. 17.

15 Henri Longpérier (1816–1882), numismatist and archaeologist, from 1848 a curator of the Egyptian division in the Louvre. He described the collection of Jan Działyński in the following article: Henri Longpérier, "Vases peints inédits de la collection Dzialynski," in: Revue Archeologique, vol. XVII (1868), 345-354.

22 In the Prussian partition, in the area of which Kórnik was located, the authorities conducted Germanization actions aimed at Polish culture and language. Tytus Działyński's fears were very much justified.

23 Jan Działyński describes his activities related to organization of the exhibition in a preserved letter to his wife. BK 07339, k. 237.

26 The general formulation relies on the description of items in the wardrobes during the making of an inventory in 1863.

27 An example of such an exhibition was the Exhibition of Antiquities and Art Objects in Warsaw in 1856. This was the first exhibition in the area of Poland presenting historical items. One of its organizers, Bolesław Podczaszyński, described the system of grouping the exhibits in these words: "Therefore, after many attempts and changes, when the systems or chronological layouts adopted in foreign collections or division into countries, owners, materials, etc. were of no use, a division was adopted into types of items according to their intended use; in turn, such items were arranged chronologically and according to similarities and grouped in great divisions arranged according to subsequent periods of time." Quotation after Jerzy Kowalczyk, "Starożytnicy warszawscy połowy XIX w. i ich rola w popularyzacji zabytków ojczystych," in: Edukacja historyczna społeczeństwa polskiego w XIX wieku, ed. Jerzy Maternicki, Warsaw 1981, 189. Other exhibitions organized in Poland did not have such transparent displays. This is testified to by the preserved illustrations and photographs of their interiors. Cf. Wystawa starożytności w Krakowie w pałacu XX. Lubomirskich, lithographs by H. Walter, exh.cat., Krakow 1859; Zabytki XVII wieku. Wystawa jubileuszowa Jana III w Krakowie 1883, exh.cat., Krakow 1884.

29 Cf. Barbara Dolczewska and Zygmunt Dolczewski, "'Oblubienica ojczyzny', czyli patriotyczna biżuteria Działyńskich," in: Amulet – znak – klejnot. Biżuteria w Polsce. Materials from the 4th Scientific Session organized by the Toruń Division of the Association of Art Historians and the International Gdańsk Fair in Gdańsk, Toruń 2003, 88-89. The authors remind one of the person of Tytus Działyński's sister and her popularity in Polish artistic and literary circles in the 19th century.

30 Ludwik Konstanty Pociej (1664–1730), a Lithuanian field marshal, supporter and friend of Peter I the Great, morally and materially subject to Russia. He played the role of the trusted supporter of Russia during the crisis of power of August II the Strong in Poland which ended with the arrangements of the so-called Silent Sejm in 1717. Cf. Paweł Jasienica, Rzeczpospolita Obojga Narodów. Dzieje agonii, Warsaw 1997, 90-91.