On the Hierarchy of Saints on Altars

Visitation Records of Otto Friedrich Buchheim, the Bishop of Ljubljana (1641–1664)

The visitation records of Otto Friedrich Buchheim, the Bishop of Ljubljana from 1641–1664, offer an insight into the rules governing the disposition of saintly figures in altar retables. The central place was accorded to the titular saint, while companion saints are positioned in pairs (separately for each level of the retable) in such a way that those of higher rank are placed on the more distinguished gospel side, whereas those of lower rank stand on the subordinate epistle side. The priority of one saint over another was not a matter of a random choice, but of a fixed hierarchical order which was created over the course of centuries in the Litany of All Saints and also in the hymns of the officium for All Saints Day; this hierarchy, as Buchheim remarks, is "in agreement with the general feeling of the Catholic Church". Ecclesiastical art in Slovenia shows that in the Gothic period the hierarchical principle governing the disposition of saintly figures was not yet firmly fixed, but it was fully established in the late Renaissance and Baroque periods, which coincides with the period of unification of the Litany of All Saints for the entire Catholic Church. Later it started to loosen again, yet it remained in force up to the 20th century. 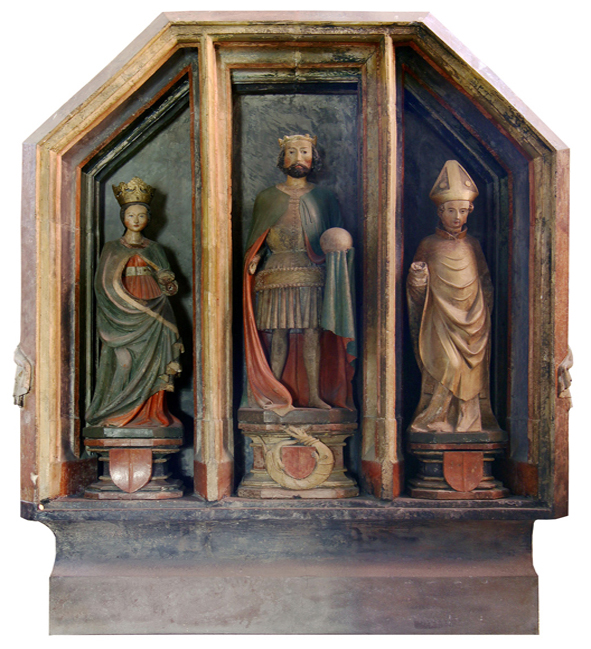 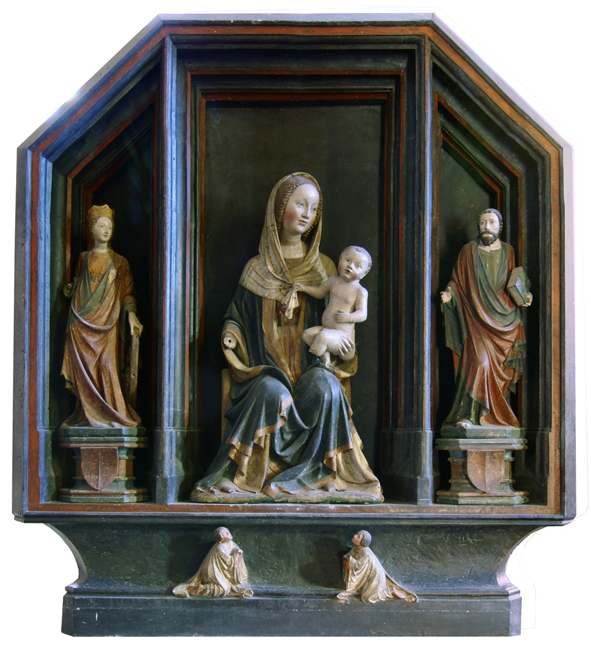 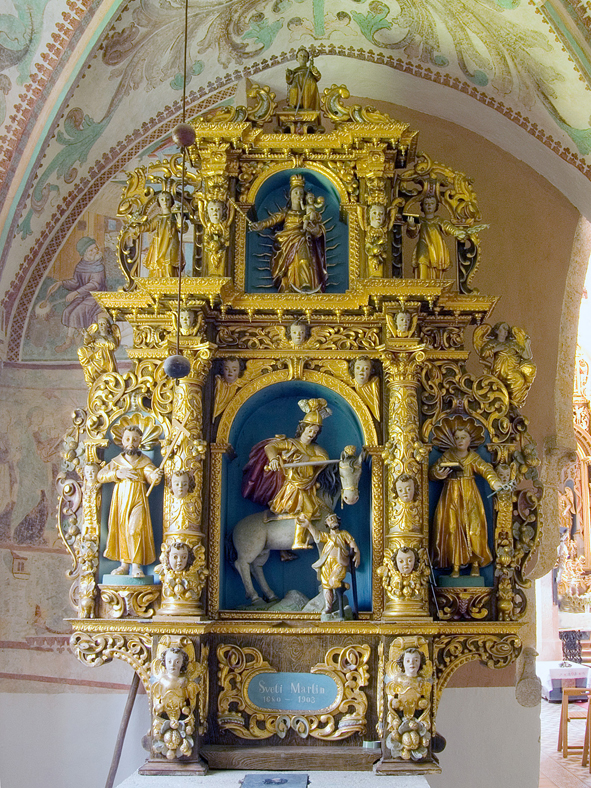 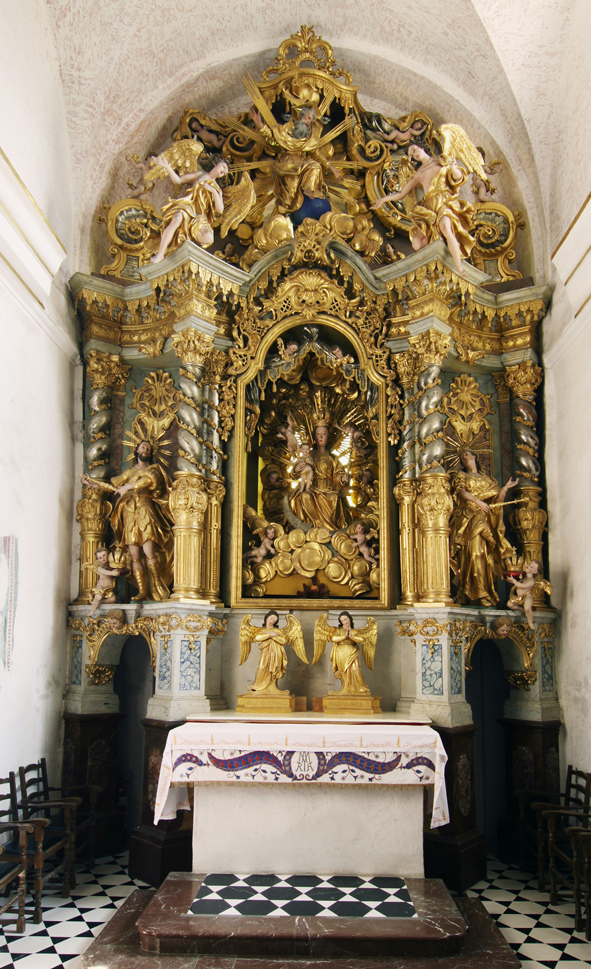 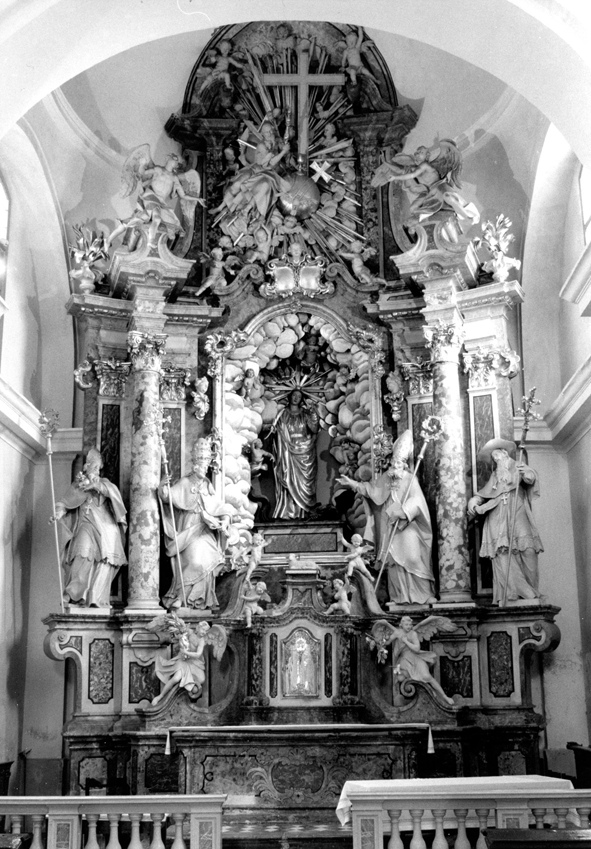 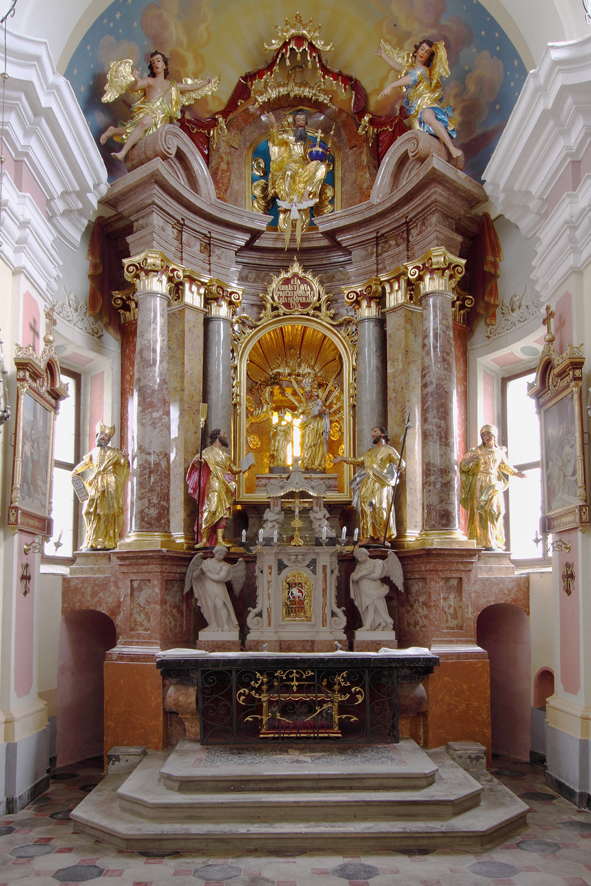 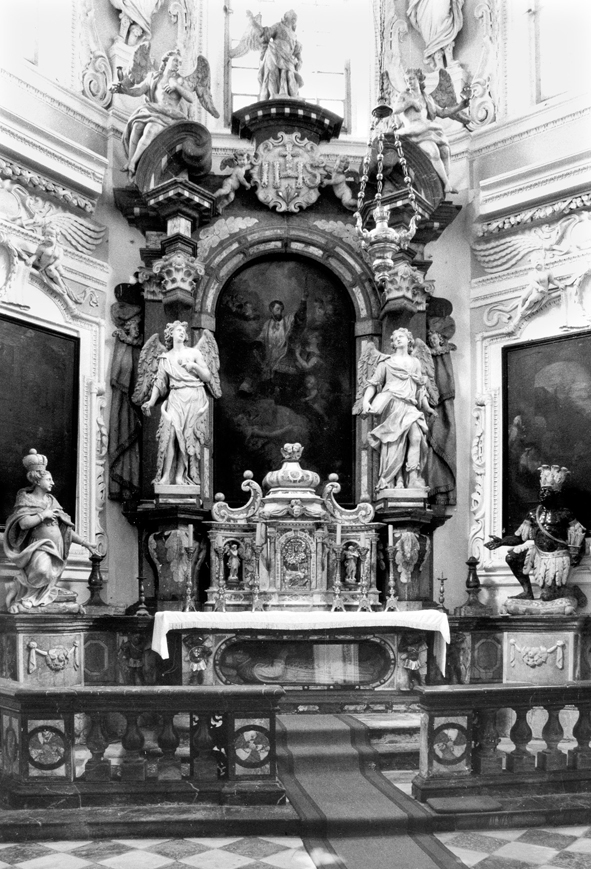 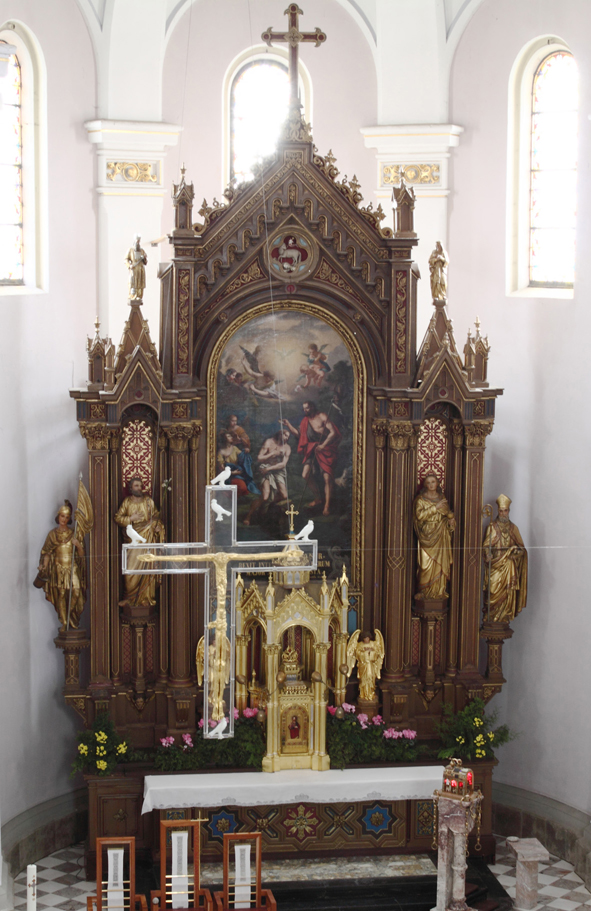 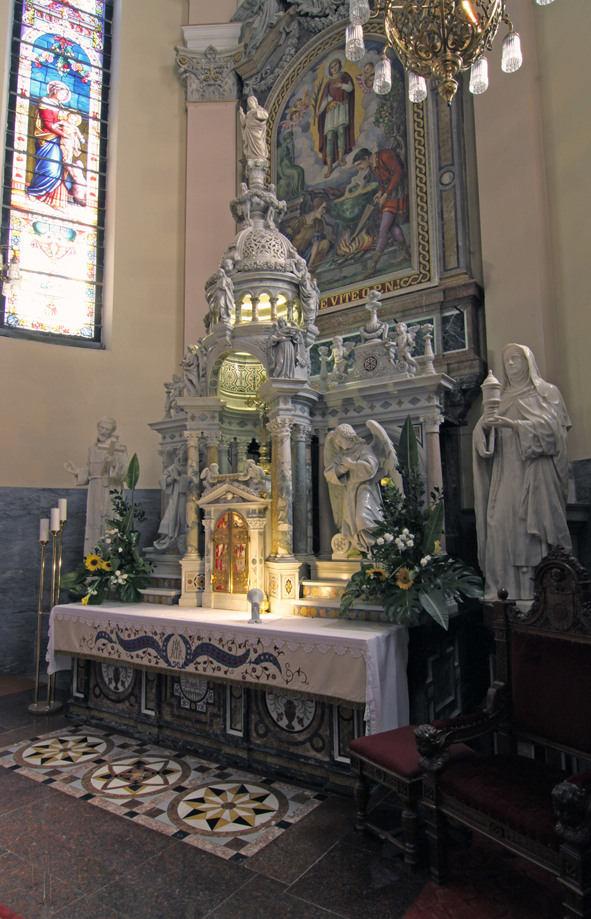 7 It is rather interesting that Bishop Buchheim reported discontentedly to Rome that the believers in his diocese also wanted to build churches in honour of certain characters of the Old Testament, see: France Dolinar, Podoba ljubljanske škofije v rimskih poročilih škofov Rinalda Scarlichija in Otona Friderika Buchheima, in: Bogoslovni vestnik 40 (1980), 31.

14 The ranking of the heavenly choirs can already be seen in medieval depictions of All Saints, or the heavenly liturgy, of which one of the most famous examples is the Ghent Altar by Hubert and Jan van Eyck of 1432, where, next to the mystic Lamb of God and the fountain of life, stand first the prophets and the patriarchs, as well as the apostles and the doctors, next come the martyrs, bishops and confessors, and as the last the female saints, while on the wings (with regard to the name and profession of the patron) follow the Knights of Christ and the righteous judges, holy hermits and holy pilgrims, see: Günther, Die Bilder des Genter und des Isenheimer Altars, 29; cf. Karl Künstle, Ikonographie der christlichen Kunst. 1. Prinzipienlehre, Hilfsmotive, Offenbarungstatsachen, Freiburg i. Br. 1928, 558-560; cf. Feurstein, Allerheiligen, 365-374. For the medieval understanding of the saintly hierarchy, see the Golden Legend (Legenda Aurea), which acknowledges four choirs of saints: the apostles (prima igitur differentia est apostolorum), the martyrs (secunda differentia est martirum (!)), the confessors (tertia differentia est confessorum) and the virgins (quarta differentia est virginum), whereas it mentions the fifth choir, i.e. the patriarchs and prophets, only in connection with the legend of the vision of the sexton at St. Peter's church in the Vatican (Jacobus de Voragine, Legenda Aurea vulgo Historia Lombardica dicta, Melle 2003, 718–728).

17 The text of the Litany was revised again only after Vatican II.

18 I quote the Litany after the Roman Pontifical of 1596, kept in the Seminary Library in Ljubljana. I am indebted to Dr. Marijan Smolik for the presentation and explanation of the Litany in the Pontificals and for his suggestions in selecting literature.

19 In later variants, the acclamation to St. Joseph follows.

35 Robert Peskar, Bazilika Marije Zavetnice na Ptujski Gori, Ljubljana 2010, 139-146. The altar was damaged during a Turkish attack in the second half of the 15th century. In his record of Ptujska Gora, Paolo Santonino, who between 1485 and 1487 accompanied the Aquileian visitator Peter Carli, expressly states that the sacrilegious Ottoman hands threw the statues from the retables on the floor and impiously broke off their limbs. This might have been the reason for the subsequent rearrangement of the statues, although this cannot be confirmed from the situation on the altar; cf. Paolo Santonino, Popotni dnevniki, Celovec-Dunaj-Ljubljana 1991, 71; cf. Emilijan Cevc, Gotsko kiparstvo ( = Ars Sloveniae), Ljubljana 1967, notes s. p.

40 For the altar, see: BlaŞ Resman, Kiparstvo poznega baroka na Gorenjskem ( = Opera Instituti Artis Historiae), Ljubljana 2006, 25, 62, 198. The retable was made c. 1766 from the plan of Lovrenc Prager by the stucco master Anton Stampfel, while the statues were carved before 1774 by Valentin Vrbnik.

44 An example of this kind is the retable of St. Catherine on the wall in Tunjice, a work by Janez Potočnik of 1775, where St. Ursula stands on the wrong, i.e. epistle, side, due to copying a model print in reverse; see: France Stele, Politični okraj Kamnik. Topografski opis ( = Umetnostni spomeniki Slovenije, vol. 1), Ljubljana 1929, 140.

45 I am most grateful to my colleague Alenka Klemenc for the translation of my Slovenian paper, and my colleagues Andrej Furlan and BlaŞ Resman for the photographs.