A Phenomenology of Vision: the Self-Portraits of Jean-Étienne Liotard*

This essay analyses the self-portraits of Jean-Étienne Liotard (1702-1789). Interpreting these objects through the lens of Maurice-Merleau-Ponty's writings on art and vision, I argue that Liotard's self-portraits can be understood as artistic experiments relating to the fundamental phenomenological problem of seeing and representing the lived-body. In making this argument this essay re-evaluates the art-historical tendency to read Liotard's self-portraits biographically as pictures of his unusual life or as tools of self-promotion.

Seeing himself from start to finish

Seeing himself in the world

Seeing himself as art

'It is by lending his body to the world that the artist changes the world into paintings. To understand these transubstantiations we must go back to the working, actual body – not the body as a chunk of space or a bundle of functions but that body which is an intertwining of vision and movement.'

'One must never paint anything that one cannot see …'

Seeing himself from start to finish 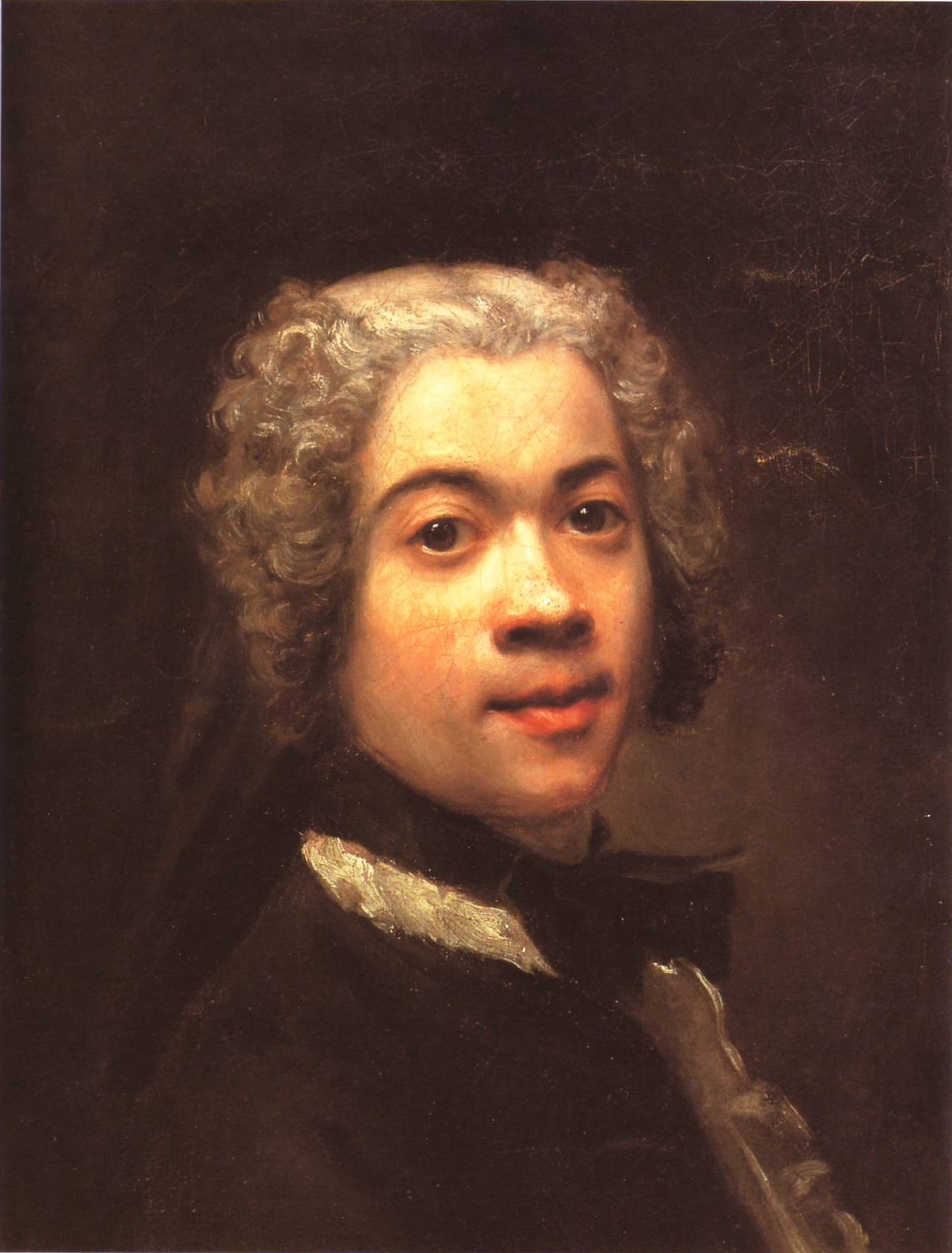 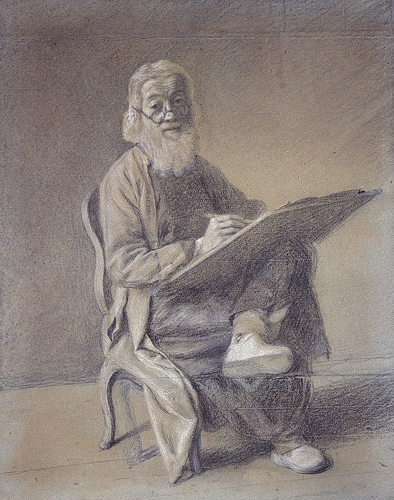 Devoid of imagination, and one would think of memory, he could render nothing but what he saw before his eyes. Freckles, marks of the small-pox, everything found its place; not so much through fidelity, as because he could not conceive the absence of anything that appeared to him.27

The only merit in Liotard's pictures is neatness, […] the characteristic of a low genius, or rather no genius at all. His pictures are just what ladies do when they paint for their amusement.29

Seeing himself in the world 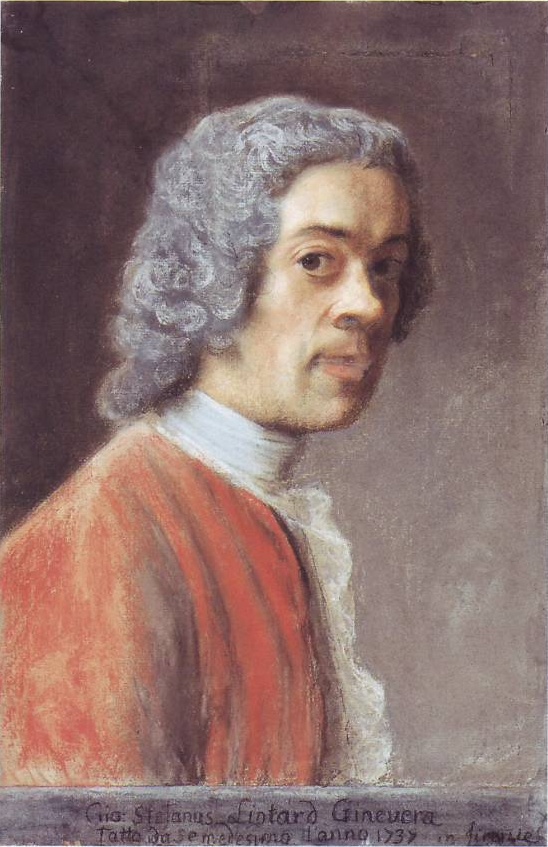 Seeing himself as art 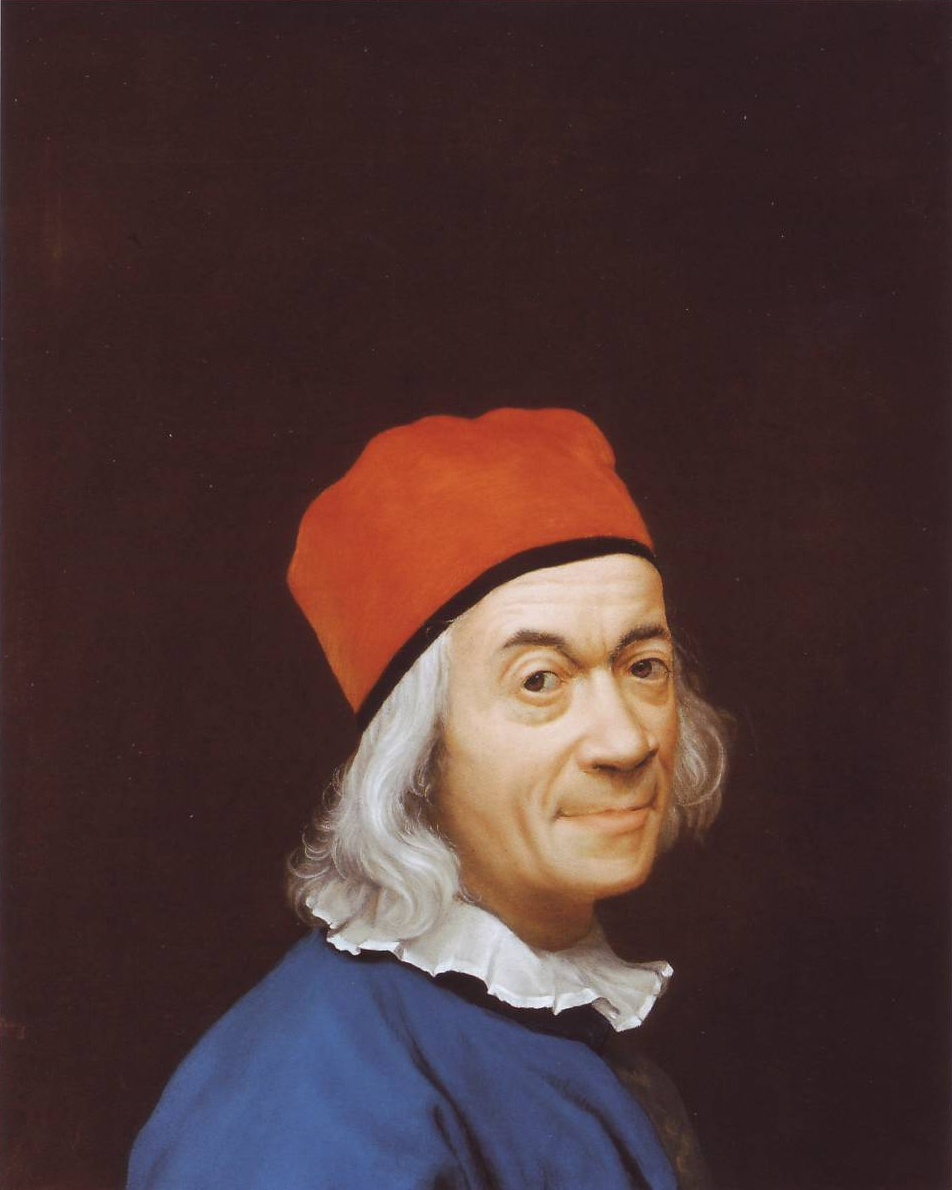 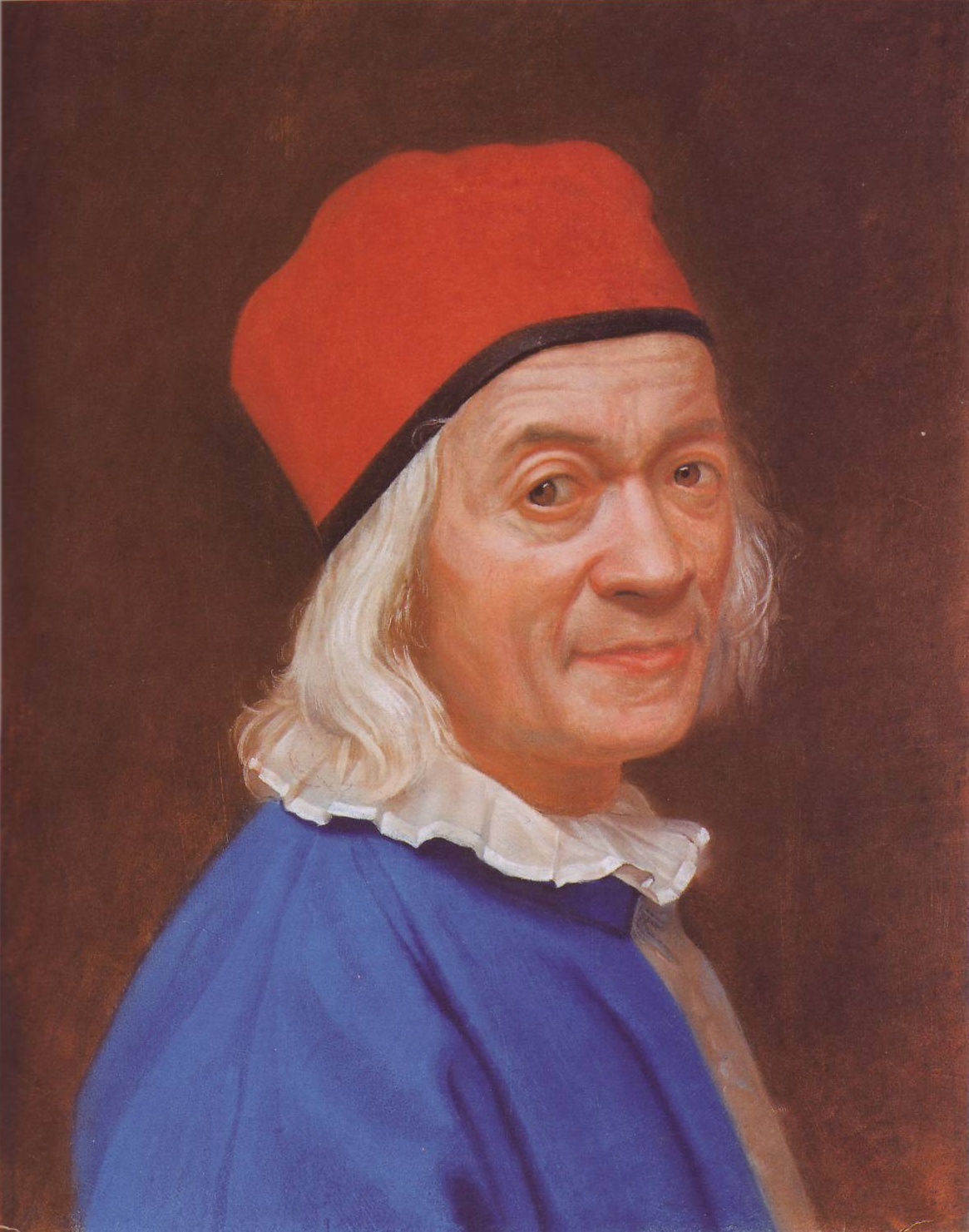 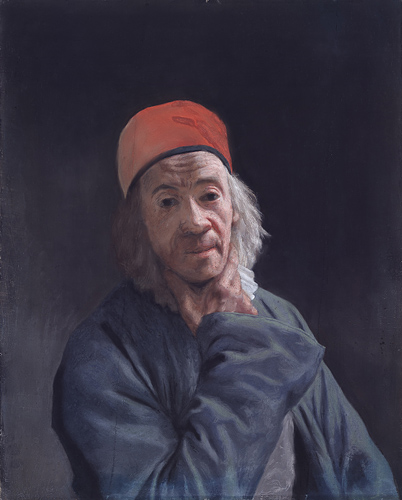 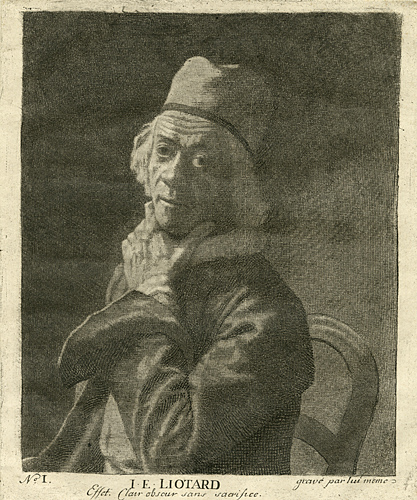 See No. I, my portrait: here I have attempted to achieve a fine chiaroscuro; and while my shadows are deep, they are nevertheless soft, having sacrificed nothing to the lights. The shadow of the hair and the shirt being a little darker than the lightest light in the suit, this half-length figure is detached from his background; one can see here the application of several principles that I am attempting to explicate in this text.45 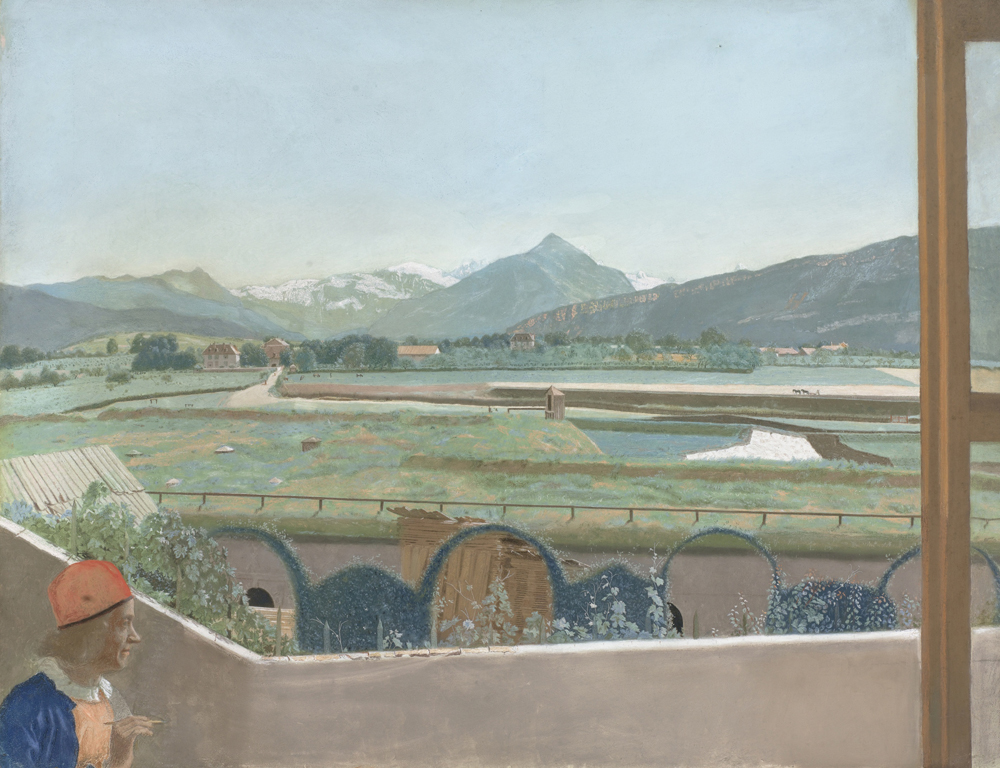 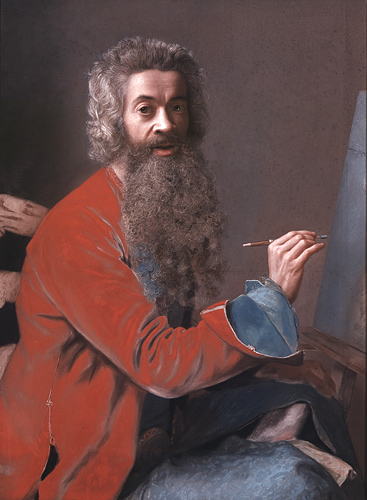 * For their valuable comments, suggestions and assistance in research, I thank John Chu, Keren Hammerschlag, Edward Payne, Marcel Roethlisberger, Katie Scott, Mélanie Vandenbrouck-Przybylski and the RIHA Journal reviewers. Earlier versions were delivered at the Centre Allemand d'Histoire de l'Art in Paris and at the Association of Art Historians Annual Conference at Tate Britain in 2008. Translations are my own unless otherwise indicated.

16 I have designated these as Liotard's first and final self-portraits to provide conceptual points of departure and conclusion. It is possible that Liotard painted an earlier self-portrait in his youth, and the final drawing was made in preparation for a now lost painting, but in the absence of firm attribution or the object itself, these two works provide a tangible beginning and end.

18 Liotard described this self-portrait in a list of works proposed for sale to the French royal collection in 1785. Roethlisberger and Loche, Liotard, vol. 1, 662.

27 Horace Walpole, Anecdotes of painting in England; with some account of the principal artists; and incidental notes on other arts, vol. 4, Strawberry Hill 1765-1780, 90.

30 For an analysis of Liotard's approach in terms of a cultural exchange with the alternative stylistic forms he encountered in his oriental travels, see Kristel Smentek, "Looking East: Jean-Étienne Liotard, the Turkish Painter," in: Ars Orientalis 39 (2010), 85-112.

32 Maurice Merleau-Ponty, "The Child's Relations with Others," in: The Primacy of Perception, trans. William Cobb, Evanston 1964, especially 125-129.

34 For a fascinating analysis of the inscription in this self-portrait see Sheriff, "The Dislocations of Jean-Étienne Liotard," 97-121

35 Sheriff, "The Dislocations of Jean-Étienne Liotard," 103.

39 For an elaboration of this problematic see Derrida's notion of the triadic relation between 'subject', 'object', and 'signatory'. Jacques Derrida, Memoirs of the Blind. The Self-Portrait and Other Ruins, trans. Pascale-Anne Brault and Michael Naas, Chicago and London 1993, 62.

43 The only notable exception being Liotard Laughing with its addition of a green curtain to the setting.

51 Ernst Gombrich, Art and Illusion: A Study in the Psychology of Pictorial Representation, 11th edition, Princeton 2000, 5-6.

55 On Liotard's concern with the mirror see: Solomon-Godeau, "Jean-Étienne Liotard," 154.

56 The direction of Liotard's hatching in his drawings indicates a right-handed body orientation, suggesting that Liotard was right-handed or at least drew with his right hand. Michael Fried, Manet's Modernism, or the Face of Painting in the 1860s, Chicago and London 1996, 372. See also Roethlisberger and Loche, Liotard, vol. 1, 661.

57 As a contrast, see Fried's excellent analysis of Henri Fantin-Latour's 'ocular realist' self-portraits, which represent the specular image rather than a corrected vision. Fried, Manet's Modernism, 371-372.

65 On Merleau-Ponty and Cézanne see: Joyce Brodsky, "A Paradigm Case for Merleau-Ponty: the Ambiguity of Perception and the Paintings of Paul Cézanne," in: Artibus et Historiae 2:4 (1981), 125-134.