The symbolism of Adam Asnyk with Muse by Jacek Malczewski

Editing and translation managed by:

The essay's goal is to interpret Jacek Malczewski's picture Adam Asnyk with Muse (1894-1897) as a symbolic work. The main argument is that the painting does not depict a scene with a poet being inspired by a muse. The starting point of the analysis is the conclusion that the Muse is not playing the lyre she is holding and that the wings of Hermes are attached only to one leg. The role of the instrument is crucial for the interpretation of the painting not only because it is not used in accordance with its function but also because of the planimetric as well as semantic relationships with other elements of the picture, above all with one of the sheets of paper on the table and the scythe held by a warrior in the spectral pageant. The Muse presses the sheet with the lyre, lifting it and directing its sharp point towards Asnyk's head. The sheet is made similar in its form to the scythe above it, directed towards the manacled young men above the poet. The comparison between the figures introduced in this way suggests that the real nature of the inspiration is destructive for the poet. A comprehensive interpretation of the relationship thus constituted leads to the conclusion that the symbolic meaning of the painting is based on the opposition between the conventional iconography of a poet and the idea of creation conceived as a liberation of the artist from traditional and ossified symbolism (music, the wings of Hermes).

The scythe and the books 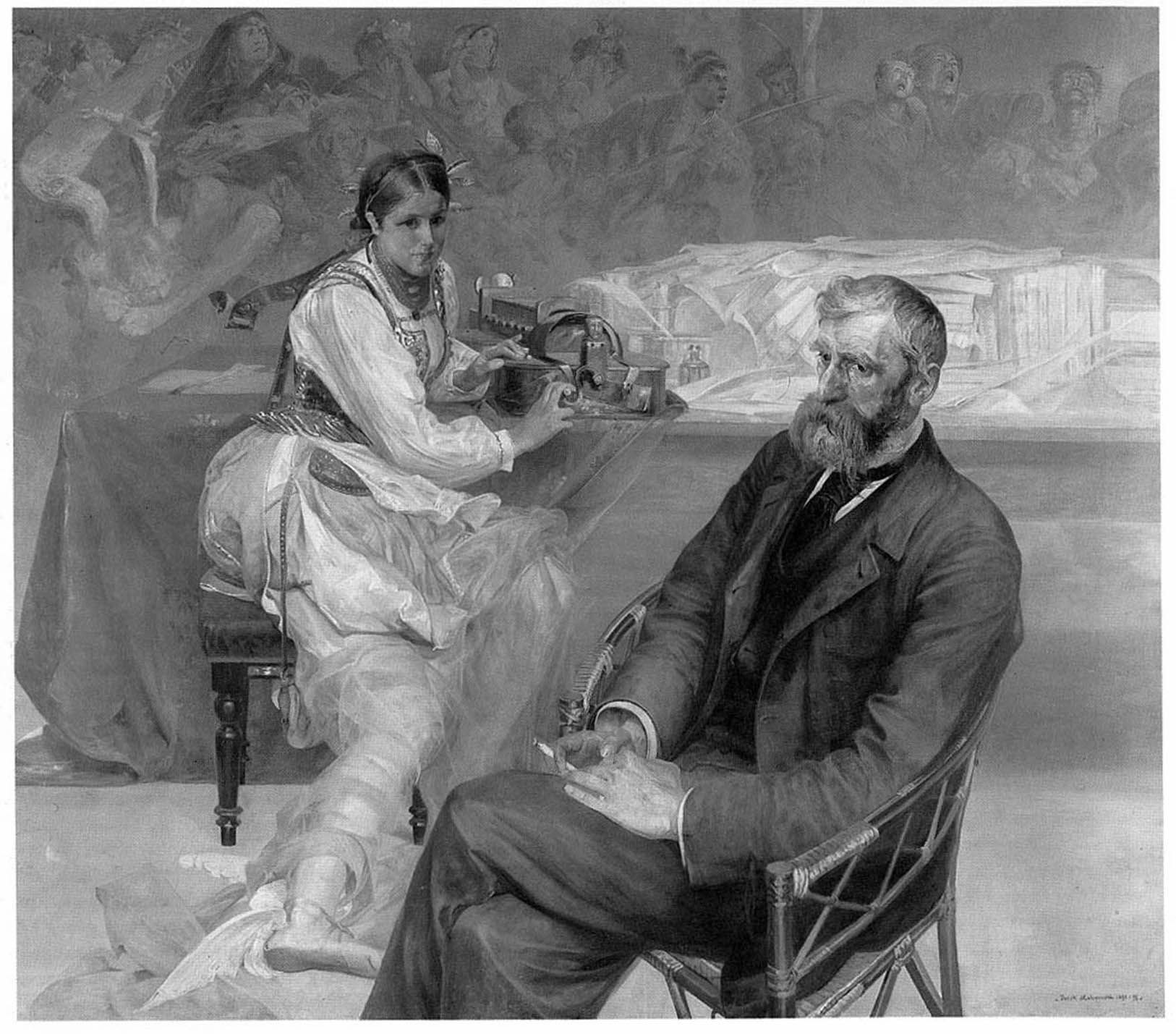 In his very numerous portraits Malczewski is writing poems about the models and trying to enhance their expression, he introduces additional figures, real or fantastic, he is placing some emblems and signs in their hands, he is painting various symbolic accessories in their hands.3 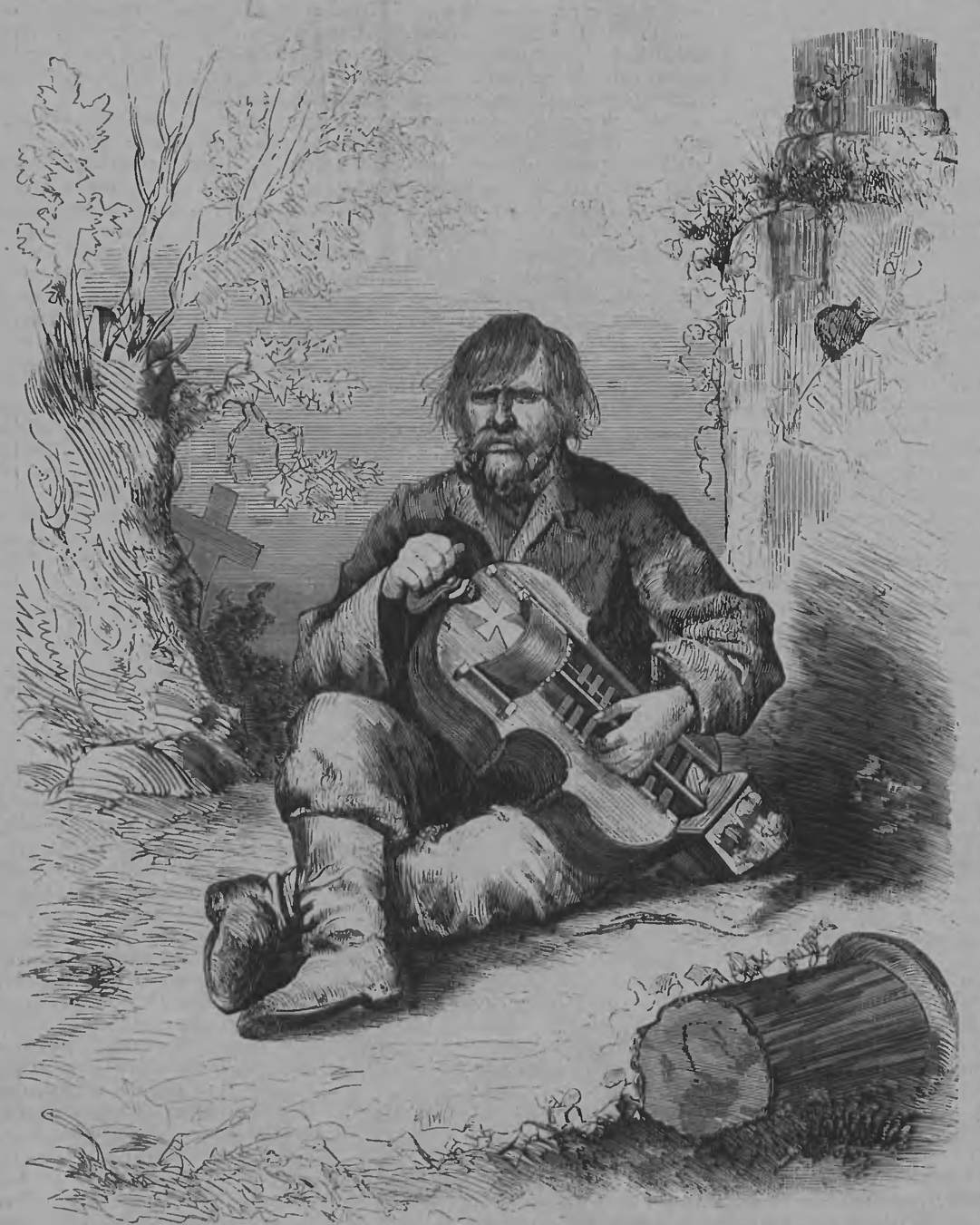 2 Franciszek Kostrzewski, Ukrainian Lyre Player, 1861, woodcut based on the author's drawing, drawing based on Karol Beyer's photo. Tygodnik Ilustrowany 1861, no 77, 96 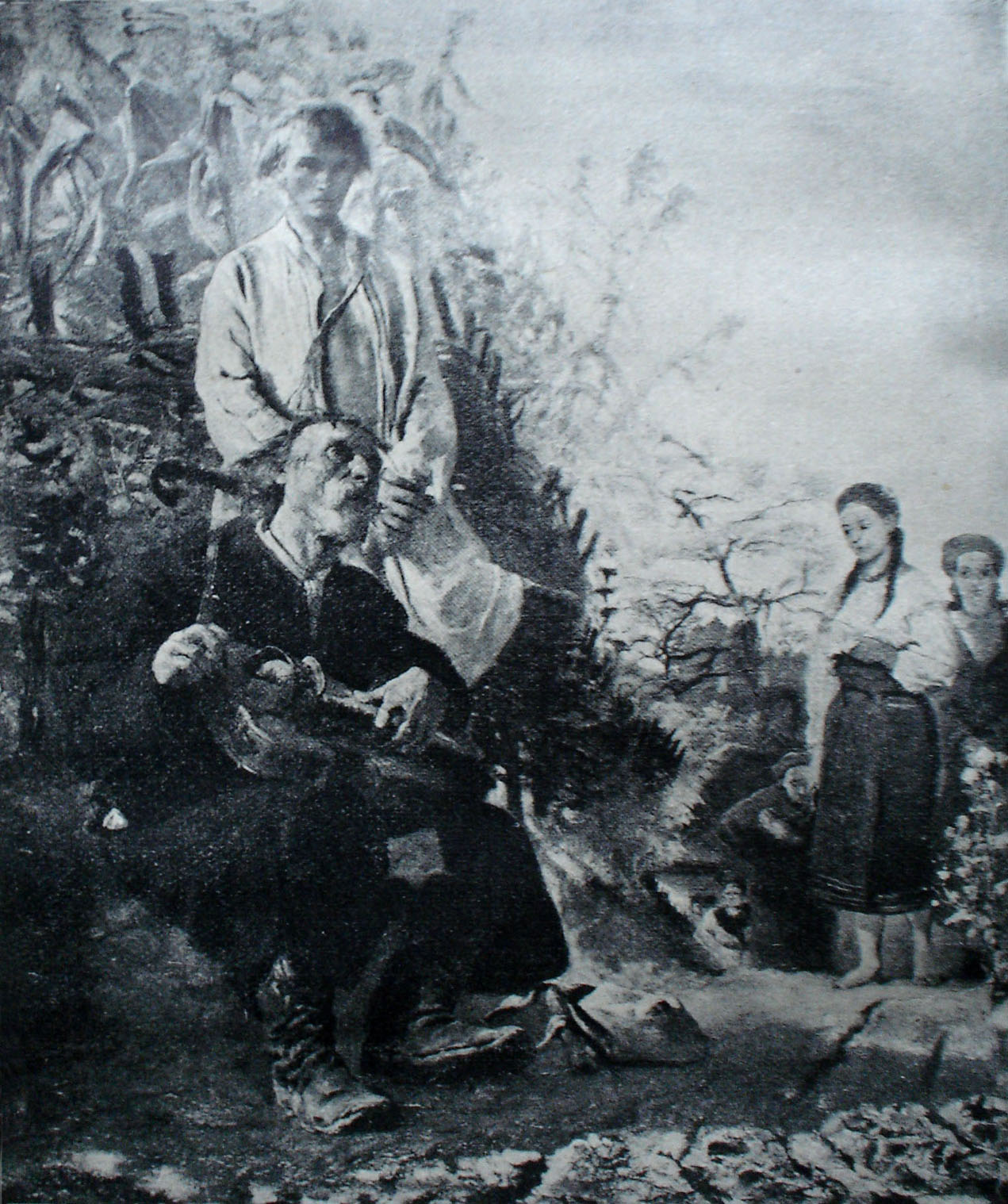 his (Asnyk's – M. H.) Muse, although carrying air-lifting wings, seems lazy, overwhelmed by overabundance of pain and sadness; he is not striving towards changes, although his passions push him towards them, for as he says himself:

The scythe and the books

Hellada before me – how could its peace and rhythm not inhabit my body, admittedly Gothic but still young. Perhaps the figures of my imagination will rid themselves of wrinkled and bent foreheads and hands tugging at the manacles of enslavement – and eyes paralysed with horror.27

An imperative of absolute artistic representation is: representing with complete indifference (völlige Indifferenz), namely in such a way that the general is the particular and the particular is general rather than signifying it. (…) The meaning is here also the being itself, transferred into an object, they form a unity.36

Since in art the direct representation of an object is not its goal, all elements of the painterly language, such as lines, planes, shades, light and colours, become abstract elements, which may be combined, enlarged, modified in accordance with their expression, in order to arrive at (emphasis added – M. H.) the general purpose of the work, that is to express an idea, a thought.39

Great art is as deep as an ocean. There is grandeur and majesty in depth. Were the ocean not deep, it would not be wonderful, despite its huge area. The look of the surface alone is wearysome and if the sight is able to remain (emphasis added – M. H.) on the surface for so long, it is only because under the directly perceived waves it senses invisible ones. This depth and the one escaping to infinity is a feature of great art.43

A universal and fundamental feature of sculptures is their noble simplicity and quiet greatness, both in the posture and in the expression. Just as the depths of the sea always remain calm however the surface may rage, so does the expression of the figures of the Greeks reveal a great and composed soul even in the midst of passion.47

Symbolism – claims one of Goethe's maxims – changes a phenomenon into an idea and an idea into an image, and it achieves it in such a manner that the idea in the image always remains active and (at the same time) unreachable and although it is expressed in all languages, it remains ineffable.49

15 Lirnik ukraiński (Ukrainian Lyre Player) by Franciszek Kostrzewski from 1861, in: Tygodnik Ilustrowany 1861, no 77, 96 (fig. 2); Lirnik by Hipolit Lipiński from 1876, MNK; Św. Kazimierz rozdający jałmużnę by Kazimierz Mirecki from 1884, MNK; Lirnik przed chatą by Kazimierz Pochwalski from 1889, MNW; Lirnik ukraiński by Michał E. Andriolli, woodcut, Ziarno 43 (1911), 853. Malczewski's painting was reproduced as Dumka in: Adam Heydel, Jacek Malczewski. Człowiek i artysta, Kraków 1933, 96. In the MNW collection there is a sketch for this painting, also depicting a lyre player with his hand clasped on the crank. Studium sceny ze ślepym lirnikiem, c. 1877, Nr inw. Rys. Pol. 5701 MNW. The present writer is not aware if lyres in which the crank could be turned with the left hand were produced.

17 Teresa Grzybkowska, "Wprowadzenie," in: Muzyka w obrazach, 8. We should also quote the opinion of Tadeusz Kobierzyński that the instruments appearing in the paintings do not play, (…) they exist not for the ears but for the eyes. But this opinion is general and as such it is contradicted by many pictures by Malczewski, for it would be risky to claim that, for example, the faun in the Portrait of Maria Balowa is not playing the flute. This claim is also weakened by the fact that every instrument on a painting, including those used in accordance with their function, exists for the eyes as well. Tadeusz Kobierzyński, "Archetyp melancholii w malarstwie Malczewskiego," in: Muzyka w obrazach, 111.

18 On the painting The Law from 1903 the faun's flute is enticing the artist so powerfully that he turns his back on death, listening to the life-giving melody of the ancient world; in the painting Unknown Note: the satyr plays his melody on the flute to an old painter Stanisław Bryniarski". Teresa Grzybkowska, "Rola muzyki w obrazach Jacka Malczewskiego, in: Muzyka w obrazach, 20, 30-31.

26 S(?)nicki, Poeci i komediopisarze. [Vain were my efforts to create a sphere of life, / Dreaming was my life, awakening was a torture, / And lurking grimly from behind the clouds, / I was looking at the world tearily but with passion.]

28 In contrast to Kudelska, who claims in the context of this quote that the dream expressed in it was not fulfilled because of the insurmountable contradiction of the artist's aspirations and the impossibility of liberating his art from the burden of the national context, I believe that Malczewski's paintings do not contradict these words but fully confirm them. Nowakowska-Sito, Między Wawelem a Akropolem, 24.

29 Kudelska, Dukt pisma i pędzla, 738, 756. The author follows the remarks of Kazimierz Daniłowicz-Strzelbicki, who as early as 1900 related the signals of enslavement (the uniform, manacles, confined spaces of the workshop) above all with dilemmas of artistic and existential nature, free of any historical and patriotic overtones. Kazimierz Daniłowicz-Strzelbicki, "Z dziejów artysty," in: Wędrowiec 25 (1900), 498-499.

32 His marked dependence on the English Romanticsm (especially the writings of Coleridge) must be borne in mind. An authoritative Polish history of the concept of symbol see Jacek Sokolski, Słownik barokowej symboliki natury. Tom wstępny. Barokowa księga natury, Wrocław 2000, 7-79.

35 Distinguishing and contrasting them by Hans Hofstätter in the context of the theory of symbols is unconvincing for may reasons. Hans H. Hofstätter, Symbolizm, Warszawa 1987, 29-35.

40 Ernst Cassirer, "Problem symbolu i jego miejsce w filozofii," in: Ernst Cassirer, Symbol i język, translation and foreword by Bolesław Andrzejewski, Poznań 2004, 47-65. The essence of a symbol is defined by Merleau-Ponty's term parole parlante, signifying a state where the semantic intent is in the incipient stage". Maurice Merleau-Ponty, Fenomenologia percepcji, translated by Małgorzata Kowalska and Jacek Migasiński, Warszawa 2001, 229. The most important twentieth-century philosophical currents undertaking the problem of symbolism are: Neo-Kantianism (Cassirer and others), phenomenology (Heidegger, Merleau-Ponty), the philosophy of existence (Jaspers), philosophical hermeneutics (Gadamer, Ricouer, De Mann), semiotics (Eco).

42 Ryszard Nycz, Literatura jako trop rzeczywistości. Poetyka epifanii w nowoczesnej literaturze polskiej, Kraków 2001, 18: (…) from Novalis, Schelling and Hegel to Friedrich, Steiner, Dorn, Derrida and Lyotard the theme of ineffability – and within it especially the oxymoronic formula of 'expressing the inexpressible' – seem to define the crucial features of modern artistic creation, both in the wider sense of art produced from the Romanticism until the decline of the avant-gardes and in the narrower sense of the symbolic art from the turn of the twentieth century.

48 It is the indeterminacy of meaning that allowed the victorious flourishing of the word and the concept of symbolism when the rationalist aesthetics of the Enlightenment era was replaced by critical philosophy and the aesthetics of genius. Gadamer, Prawda i metoda, 98.

50 Stéphane Mallarmé, "From the response to J. Huret's survey: Evolution Littéraire [1891]," in: Moderniści o sztuce. Sellection, footnotes and introduction by Elżbieta Grabska, Warszawa 1971, 252. The survey was published in Echo de Paris from 3rd to 5th March 1891.