Translation and editing managed by:

This essay examines the portrait of Maximilian von Hamilton (1714-1776), the last Prince-Bishop of Olomouc/Olmütz, painted between 1769 and 1772 by Franz Adolph of Freenthal (1721-1773), a former painter to the British royal court. The study focuses in turn on three visual motifs in Hamilton's portrait: the rhetorical gestures of the sitter, his attire and the way he is depicted, and the form of presentation and the function of the painting in the ceremonial space of the princely residence. In examining each of these motifs, account is taken of the specific visual conventions applied in this genre, and of the contemporary rules of visual rhetoric. By referencing the classical motif of modesty and moderation from antiquity, Adolph underlined the importance of the ideal of antiquity and with it "natural" speech and behaviour. He attempted to express the spirit of antiquity by comparing contemporary clothing and rhetorical gestures to those of the orators or other public figures of antiquity. In a similar way to contemporary British painters, he thus referenced models taken from antiquity, with the aim of evoking a noble past and representing the ideal of the virtue of antiquity.

"A man of many English passions"

The portrait of Maximilian Hamilton and the tradition of Baroque rhetoric

The rhetoric of antiquity and the reform of portrait painting

The search for a natural portrait

"A man of many English passions" 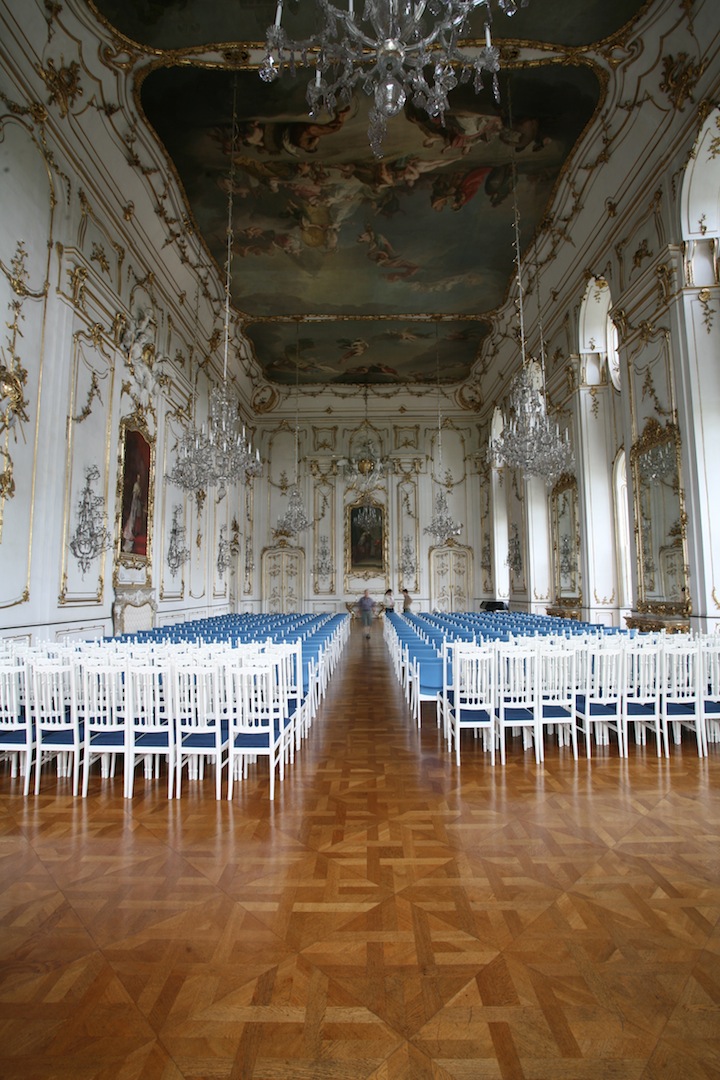 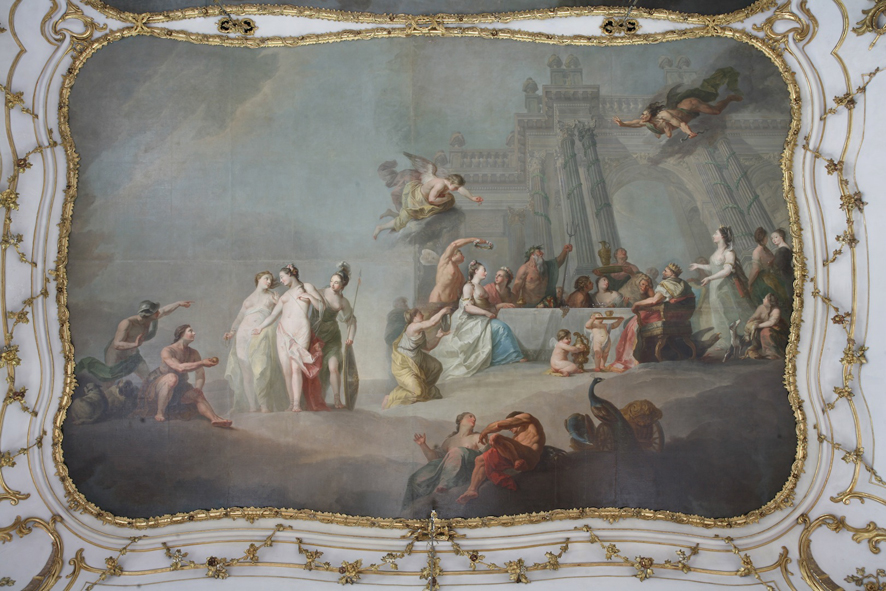 2 Franz Adolph of Freenthal, Marriage of Thetis and Three Graces (Victory of Love), 1769-72. Archiepiscopal Chateau, Kroměří (photograph © Martin Mádl, Institute of Art History of the Academy of Sciences of the Czech Republic, Prague) 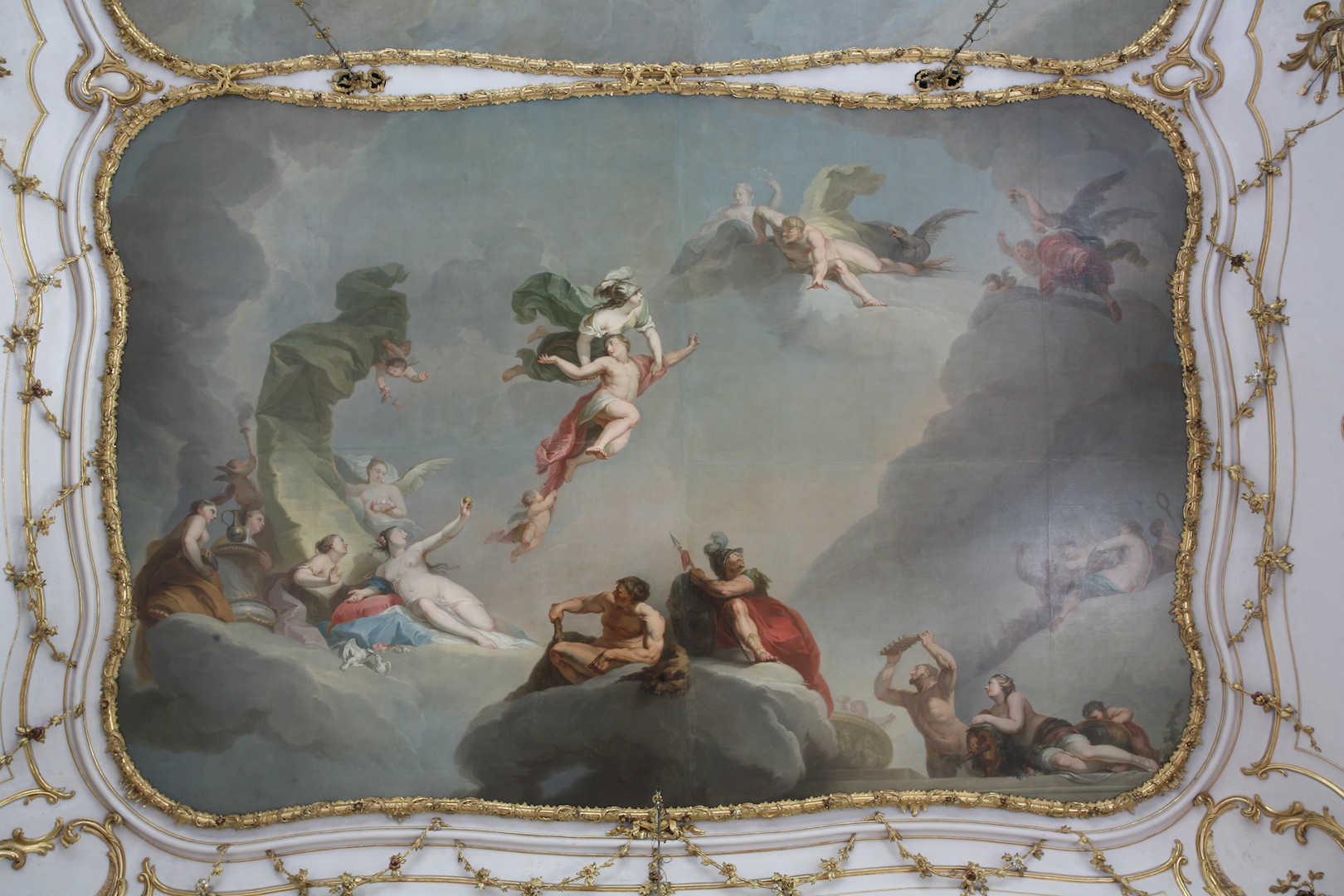 3 Franz Adolph of Freenthal, Abduction from the Bed of Sensuousness (Victory of Wisdom and Authority), 1769-72. Archie­piscopal Chateau, Kroměří (photograph © Martin Mádl, Institute of Art History of the Academy of Sciences of the Czech Republic, Prague) 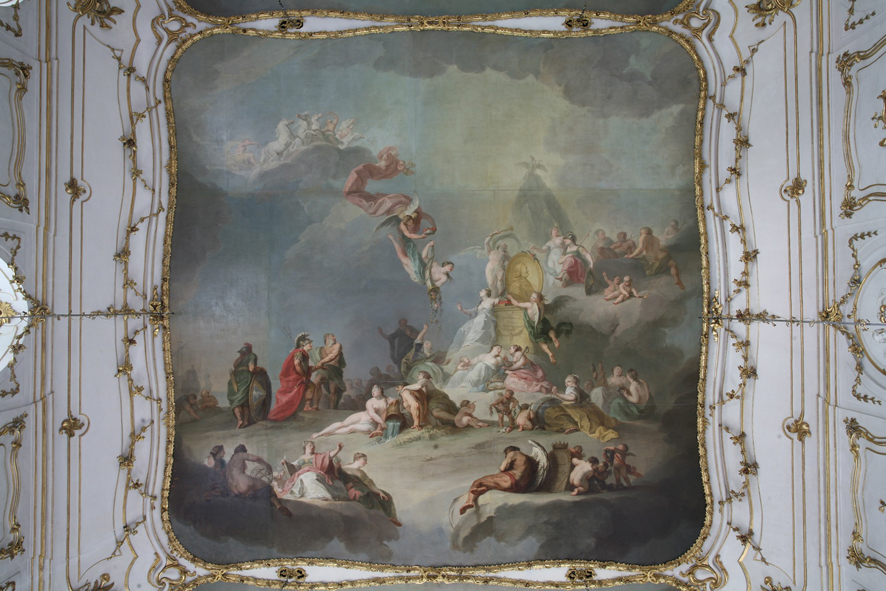 4 Franz Adolph of Freenthal, The Apotheosis of the Olomouc Bishop Maximilian Hamilton (Allegory of the family motto “Sola nobilitat virtus”), 1769-72. Archiepiscopal Chateau, Kroměří (photograph © Martin Mádl, Institute of Art History of the Academy of Sciences of the Czech Republic, Prague) 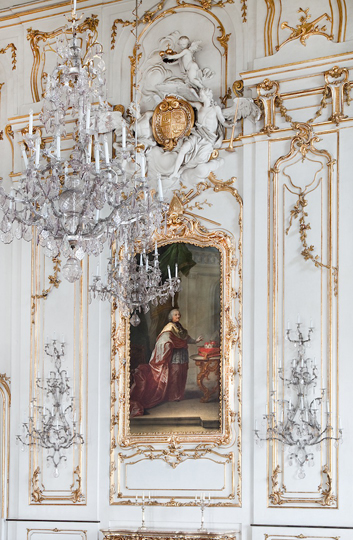 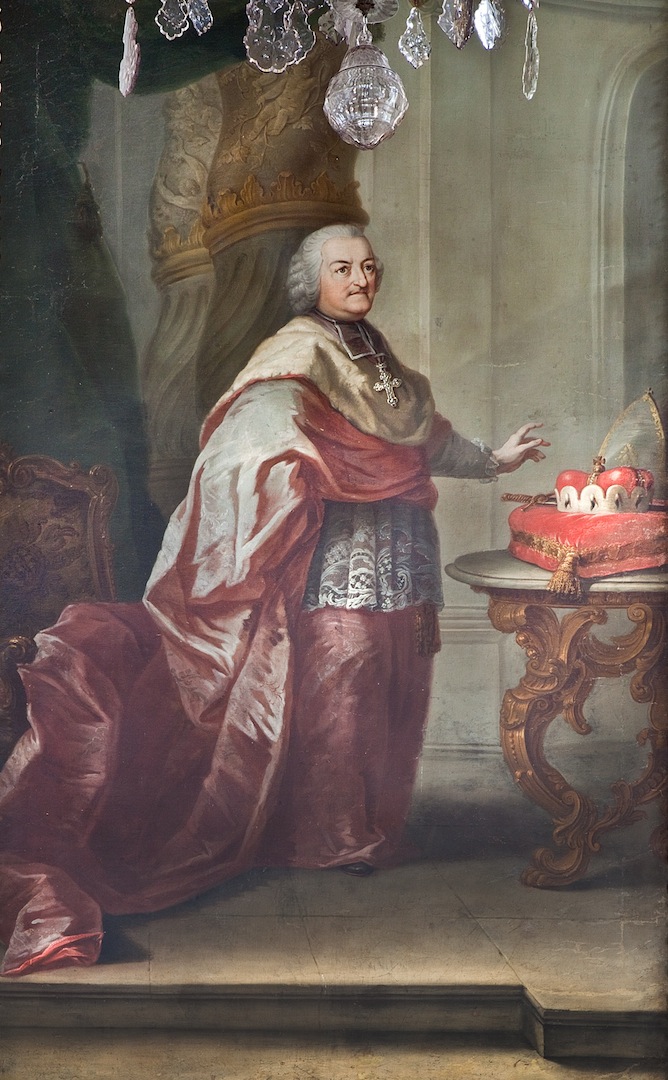 The portrait of Maximilian Hamilton and the tradition of Baroque rhetoric 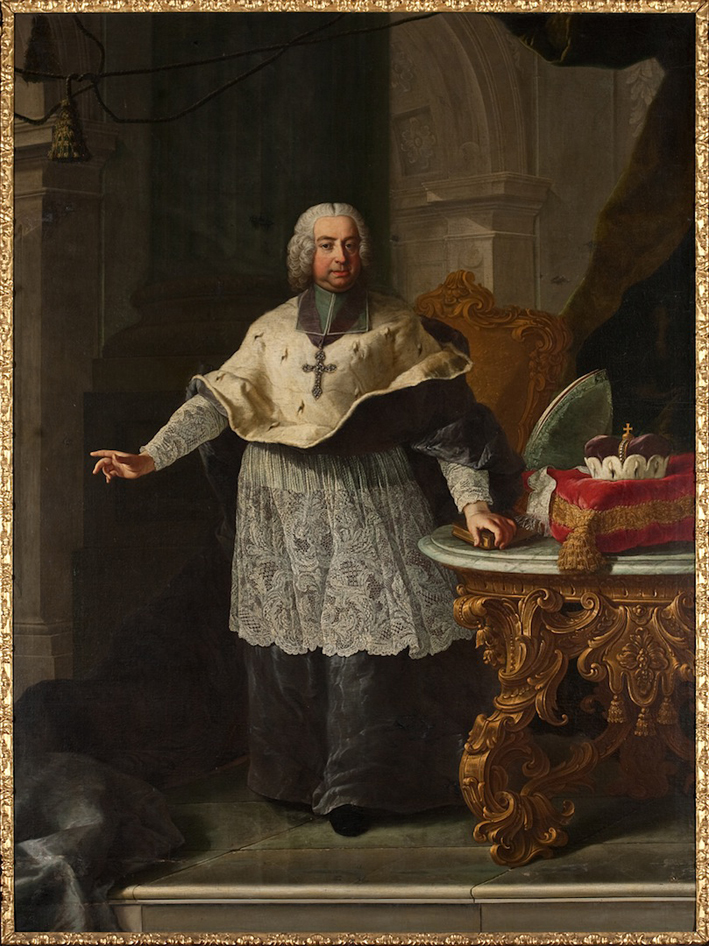 The rhetoric of antiquity and the reform of portrait painting 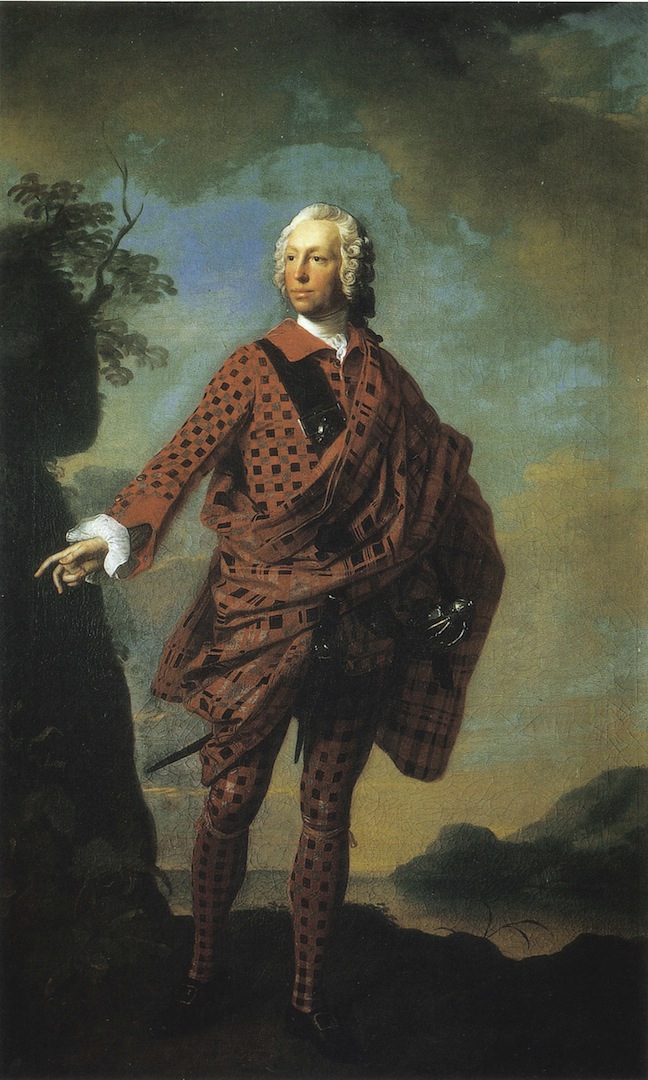 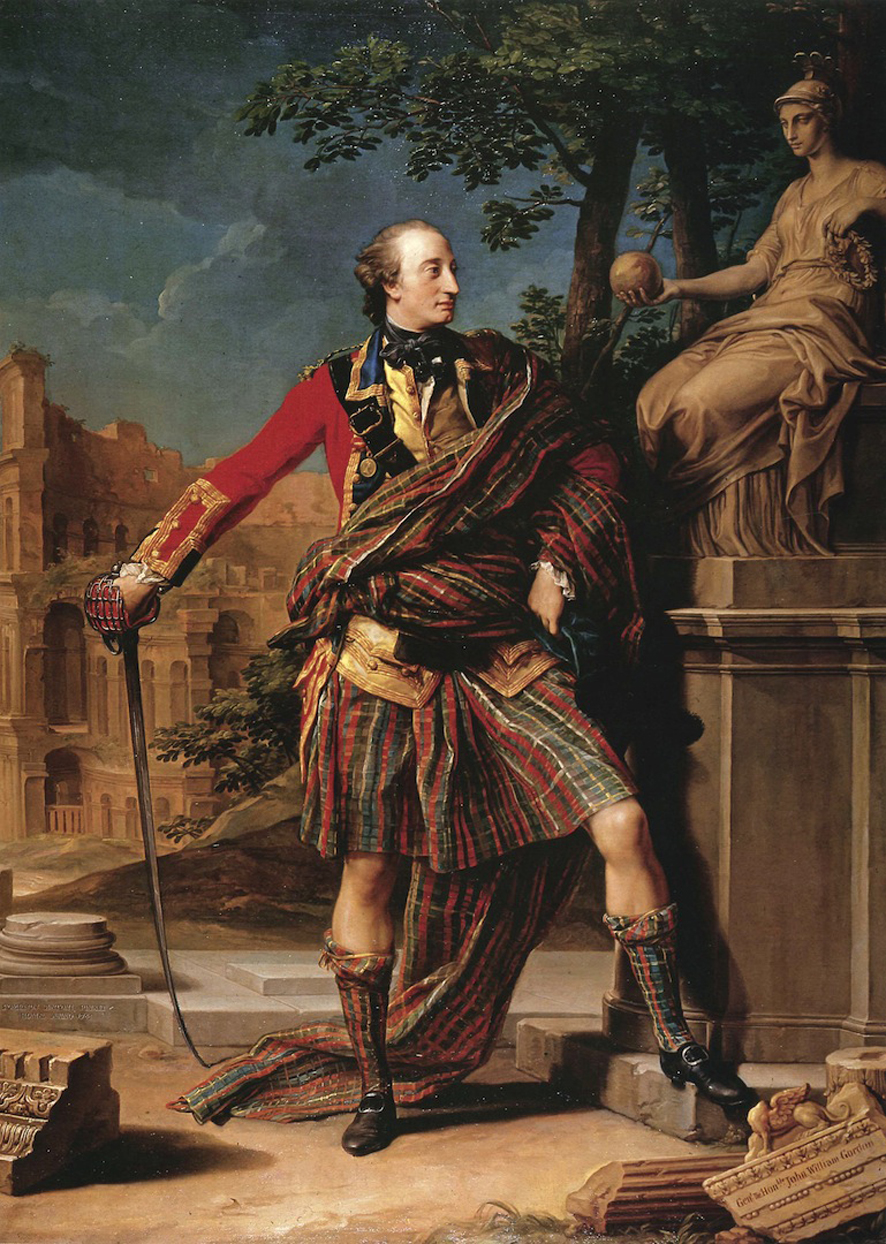 The search for a natural portrait

1 The creation of the hall in the years 1769-1772 is documented by the collection of archive material deposited in the Zemský archiv Opava, pobočka Olomouc [Provincial Archives in Opava, Olomouc branch] (hereafter referred to as ZAO-Ol), collection Ústřední správa arcibiskupských statků [Central administration of the Archbishop's estates] (hereafter referred to as ÚŘAS), inv. no. 12884, box 1713. – Part of the archive material has been published by Jiří Kroupa, who is also the author of a generally accepted interpretation of Adolph's paintings in the Large Dining Hall; see Jiří Kroupa, "Prameny k výzdobě Sněmovního sálu kroměříského zámku" [Sources on the Decoration of the Assembly Hall in Kroměří Chateau], in: Zpravodaj Muzea Kroměříska [Newsletter of Kroměří Museum] 3 (1980), 27-29. – Jiří Kroupa, "Materiálie k dějinám baroku na Moravě" [Materials on the History of Baroque in Moravia], in: Studia minora facultatis philosophicae universitatis brunensis F 32/33, 1988/89, 89-94. – JK [Jiří Kroupa], "Franz Adolph of Freenthal," in: Milan Togner (ed.), Kroměří Picture Gallery: Catalogue of the Painting Collection in the Archbishop's Palace in Kroměří, Kroměří 1999, 40-46. – The contract between Hamilton and Adolph has been published in: Antonín Breitenbacher, Dějiny arcibiskupské obrazárny v Kroměříi [History of the Archbishop's Picture Gallery in Kroměří] I, Kroměří 1925, CXXIII-CXXV. – Adolph's drafts for the design of the Large Dining Hall from the ÚŘAS holding have been published by Jarmila Vacková, "Nové poznatky k stavební historii Kroměříe" [New Insights into the Construction History of Kroměří], in: Umění/Art 5 (1957), 252-254.

2 Most of the biographical details for members of the Adolf family of painters (which in the literature are often accompanied by a number of errors and mistakes) are taken from the authentic written sources published in the article by Milan Čoupek, "Několik poznámek k ivotopisu malířské rodiny Adolfů" (Adolph) [Some Notes on the Biographies of the Adolf (Adolph) Family of Painters], in: Vlastivědný věstník moravský [Moravian Gazette for National History and Geography] 43 (1991), 179-184. – See also Jkp [Jiří Kroupa], "Adolf (Adolph)," in: Anděla Horová (ed.), Nová encyklopedie českého výtvarného umění [New Encyclopaedia of Czech Visual Art] I, A-M, Praha 1995, 18-19. – Alois Gehart and Ivo Krsek, "Adolph (Adolf, Adolff)," in: Allgemeines Künstlerlexikon: Die Bildenden Künstler aller Zeiten und Völker, München/Leipzig 1992, 405.

7 Hálová-Jahodová, "Ondřej Schweigl: Bildende Künste in Mähren," 175. – Johann Peter Cerroni also mentioned the role of the Bishop's brother Anton Johann Hamilton (1722-1776), field marshal in the Habsburg army, who was staying in London around the year 1750, and is said to have supported Adolph there, see Cerroni, Skitze einer Geschichte der bildenden Künste in Mähren, fol. 6. – Bishop Hamilton and his siblings came from the family of James Hamilton, Duke of Châtellerault (ca. 1516-1575), grandson of Mary Queen of Scots and regent of Scotland in the years 1554-1565. The Austrian and Moravian branch of the family was descended from James Hamilton, 2nd Lord Paisley, 1st Earl of Abercorn (1606-1618), whose grandson Alexander, while in the service of the Electors Palatine, became Count of the Holy Roman Empire at the end of the 17th century and acquired estates in Moravia and Hungary, and whose great-grandson Julius Franz Xaver Leopold (died 1759), the father of Bishop Hamilton, acted as Court Councillor to the Bavarian Elector in Munich, and later at the imperial court in Vienna. Sir James Balfour Paul, The Scots Peerage: founded on Wood's edition of Sir Robert Douglas's The Peerage of Scotland, Edinburgh 1904, vol. I, 47-48.

14 The first theorist to devote more attention to portraits was Gerard de Lairesse in his well-known handbook Het Groot Schilderboek from the year 1707, but it was not until Jonathan Richardson's text Essay on the Theory of Painting in 1715 that we find the first genuinely systematic approach to the art theory of portraiture. It is in Richardson that we find the two terms that we are considering here; cited after Arline Meyer, "Re-dressing Classical Statuary: The Eighteenth-Century 'Hand-in-Waistcoat' Portrait," in: The Art Bulletin 77 (1995), 45-62.

15 An important role in this respect was played, in particular, by the treatise Raccolte di statue antiche e moderne by Domenico de Rossi from the year 1704. See too the chapter "Control and Codification," in: Francis Haskell and Nicolas Penny, Taste and Antique. The Lure of Classical Sculpture 1500-1900, New Haven/London 1994, 23-30.

17 On this traditional meaning of the gesture in the rhetoric of antiquity see Richard Brilliant, Gesture and Rank in Roman Art. The Use of Gestures to Denote Status in Roman Sculpture and Coinage, New Haven 1963, 68-69. – Similarly, John Bulwer, author of a well-known Baroque handbook of rhetoric, likewise interpreted this gesture in the sense of benevolence, kindness, or goodwill. Bulwer also emphasised the power of this gesture to elicit a strong emotional reaction in listeners; see John Bulwer, "The Canons of Rhetoricians Touching: The Artificial Managing of the Hand in Speaking," in: James W. Cleary, Chirologia: or the Natural Language of the Hand and Chironomia: or the Art of Manual Rhetoric by John Bulwer, London/Amsterdam 1974, 174.

18 This painting is known only from a graphic reproduction: Bernard Baron after Franz Adolph, Equestrian Portrait of George, Prince of Wales, 1755, engraving, 635 x 480 mm, signed Adolphe Pinxit. B. Baron Sculpsit.

21 On the visual motif of the Roman toga and its significance in the context of the newly defined, modern, moral and civic portrait in the 18th century, and also more generally on the representation of civic and public virtues by means of references to the rhetorical tradition of antiquity, see more detail in David Mannings, "Shaftesbury, Reynolds and the Recovery of Portrait-Painting in Eighteenth-Century England," in: Zeitschrift für Kunstgeschichte 48 (1985), 319-328.

25 David Freedberg, The Power of Images. Studies in the History and Theory of Response, Chicago/London 1989, 234.

26 For a formal analysis of Adolph's work in Kroměří see Kroupa, "Frantz Adolph of Freenthal," 46.

27 Cf. in particular the remarkable portrait of Caroline D'Arcy, fourth Duchess of Lothian, from around the year 1750 in the collections of the National Galleries of Scotland in Edinburgh. I am grateful to the curator Helen Smailes for providing me with detailed information about this work.