In the Artist's Studio with L'Illustration

This article explores the two series of visits to the artist's studio that appeared in the famed French illustrated magazine L'Illustration in the 1850s and in 1886. An in-depth examination of both the texts and images reveals the verbal and visual tropes used to characterize the artists and their spaces, linking these to broader notions of "the artist" – his moral characteristics, behaviors, and artistic practice – as well as to the politics of the art world and the (bourgeois) ideology of L'Illustration. The aim is to uncover not only the language but also the mechanics of the "mediatization" of the image of the artist in this crucial period.

The artist as laborer

The artist as man of the world 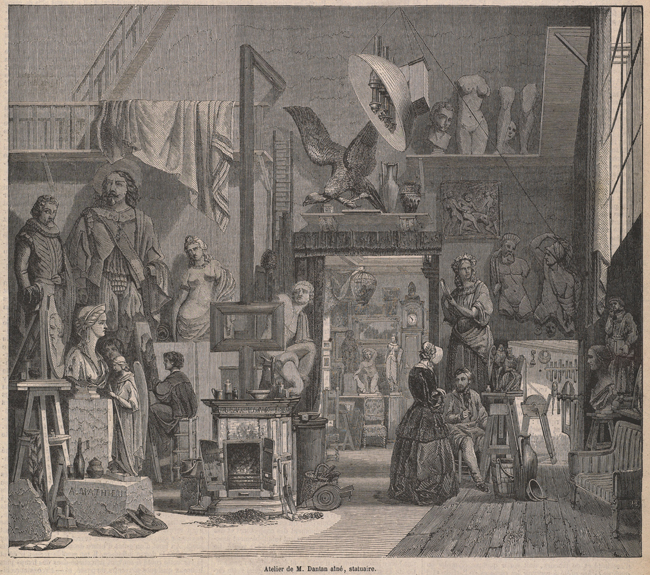 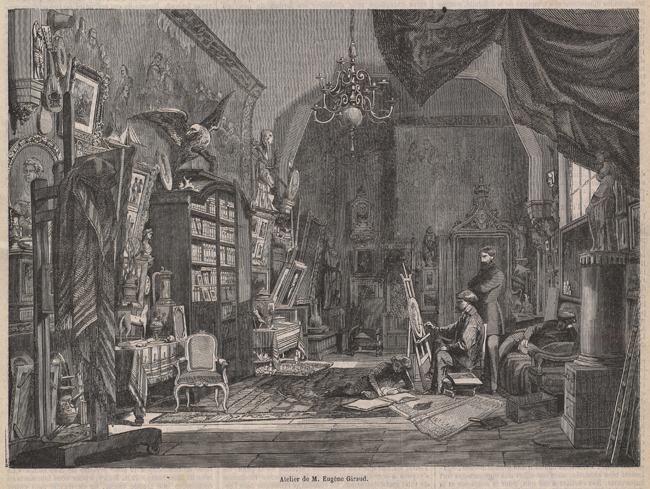 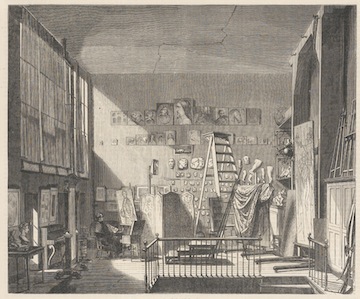 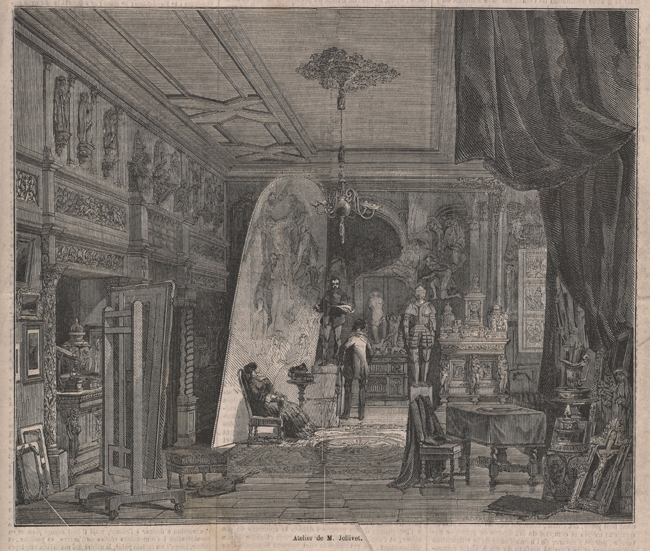 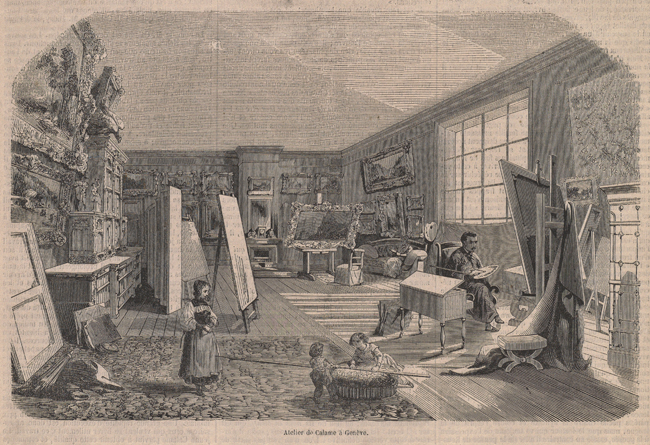 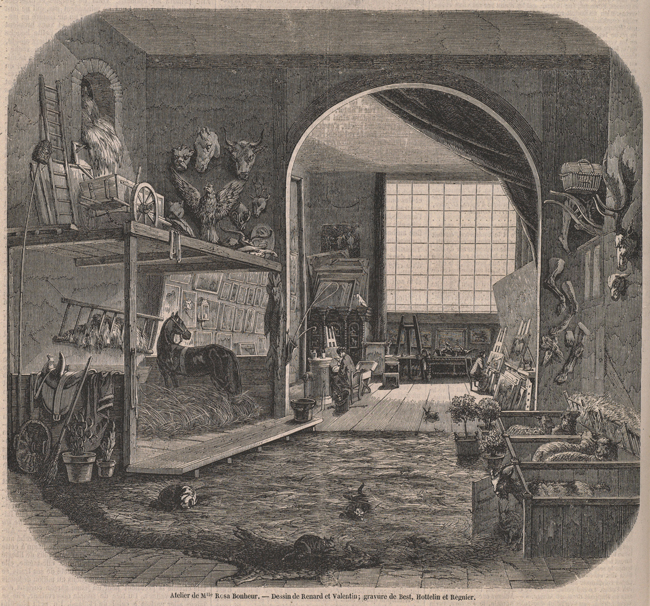 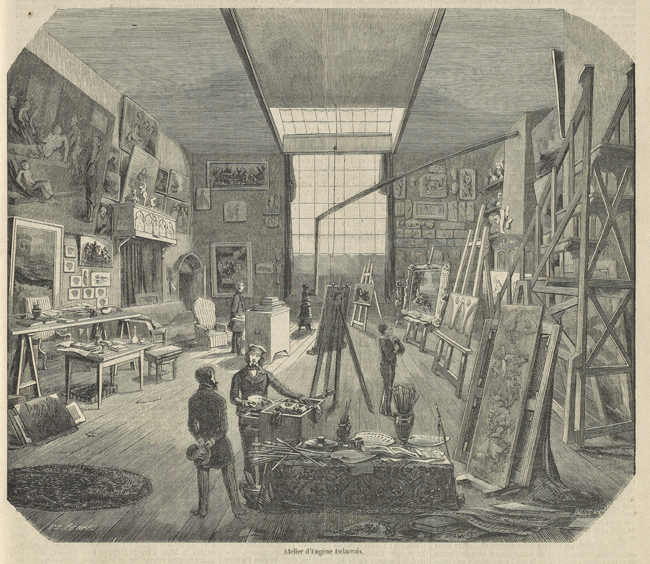 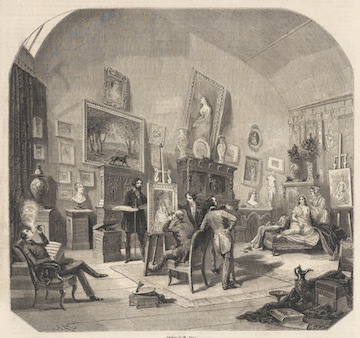 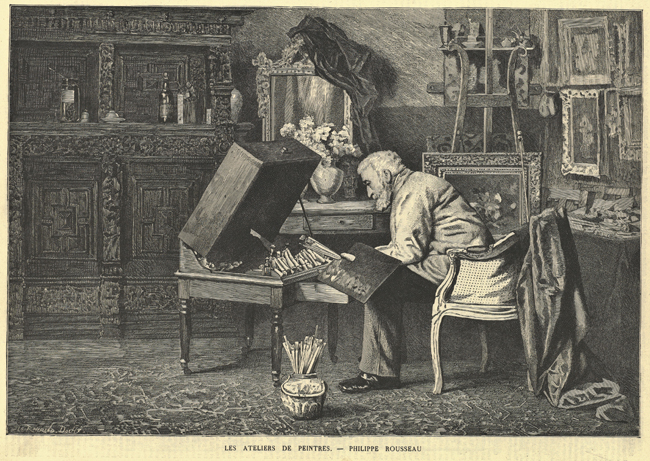 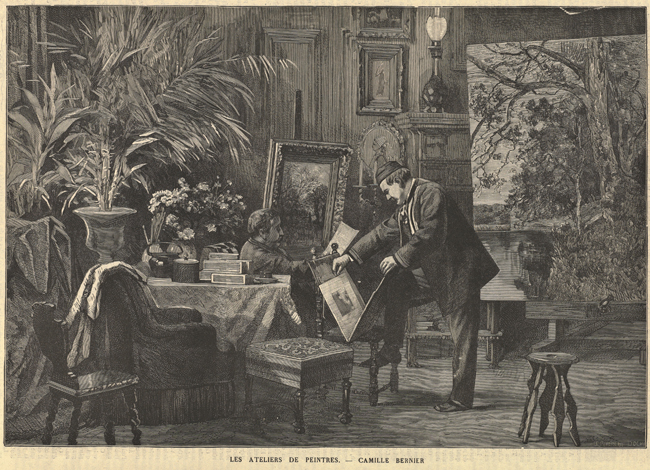 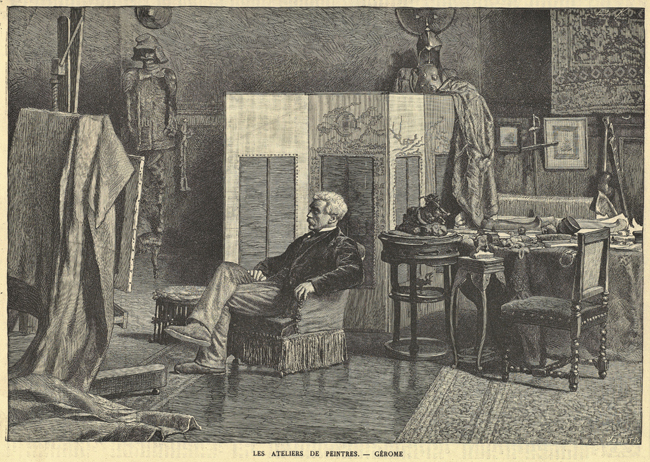 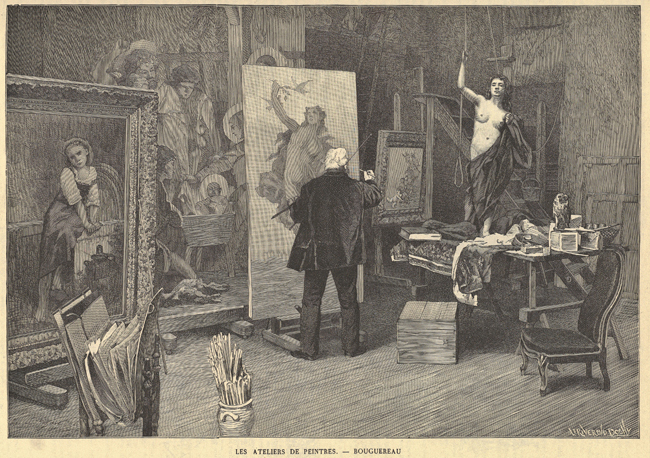 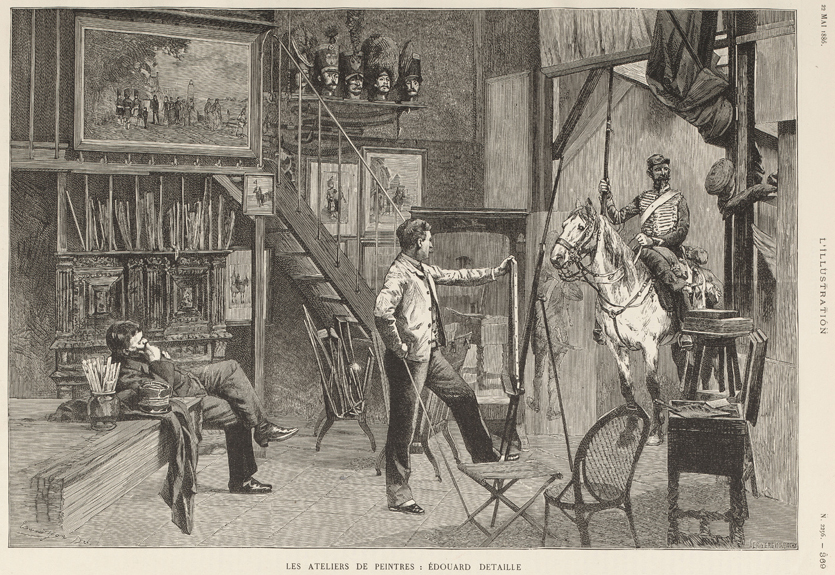 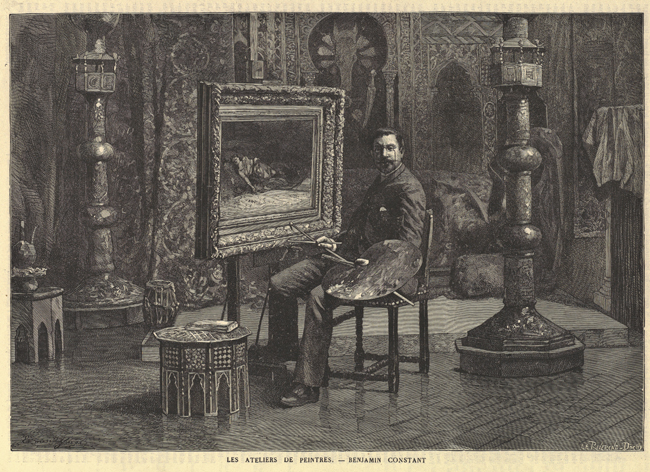 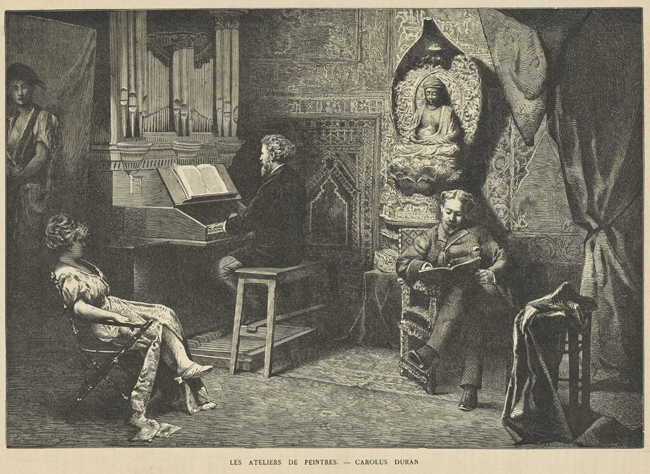 The artist as laborer

The artist as man of the world

6 On the rise of the "exhibition artist" see Oskar Bätschmann, The Artist in the Modern World – A Conflict between Market and Self-Expression, Cologne 1997. The classic study of the changes in the French art world in the nineteenth century remains Harrison C. White and Cynthia A. White, Canvases and Careers: Institutional Change in the French Painting World, Chicago 1993. See also Michael Moriarty, "Structures of Cultural Production in Nineteenth-Century France," in: Peter Collier and Robert Lethbridge, eds., Artistic Relations. Literature and the Visual Arts in 19th Century France, New Haven and London 1994, 15-29.

9 On art and the establishment in the early Third Republic see, among others, Patricia Mainardi, The End of the Salon. Art and the State in the Early Third Republic, Cambridge and New York 1993, and Richard Thomson, The Troubled Republic. Visual Culture and Social Debate in France, 1889-1900, New Haven and London 2004.

10 I use this term advisedly regarding the articles of the 1850s, which appeared incidentally over a period of seven years; the 1886 group is a series in the proper sense.

14 Jéan-Nöel Marchandiau has characterized L'Illustration's audience as having a particular antipathy towards all forms of extremism. He describes the readership as staunchly "center left, center, and center right." It was the place for all those high-minded citoyens "fuyant la fébrilité." See Marchandiau, L'Illustration (1943-1944), 298.

16 It is interesting to note that the visual and rhetorical devices I outline below occur in similar form throughout all the writings on the artist and his studio in the illustrated press in this period; see Esner, "Nos artistes chez eux," passim.

17 My approach is similar in this regard to that taken by Elizabeth Emery in her recent Photojournalism and the Origins of the French Writer House Museum (1881-1914), Farnham 2012 and by Sarah Burns in Inventing the Modern Artist. Art and Culture in Gilded Age America, New Haven 1996.

18 Diaz is of course today mainly known for his landscape paintings of the Forest of Fontainebleau; in the mid-nineteenth century, however, he was widely appreciated for his fashionable fêtes galantes and allegorical subjects, and it is in this capacity that he is discussed by Du Pays.

20 Patricia Mainardi, Art and Politics of the Second Empire. The Universal Expositions of 1855 and 1867, New Haven and London 1987.

38 In Du Pays' articles these are not, however, the pure salon or "show" studios we know from later in the century. As he makes no mention of a separate working space, it seems safe to assume that the artists discussed did in fact execute their pictures in the location where he visits them; despite their "salon-like" appearance, then, they are still in some sense places of work. In two cases in the writings of Eudel, however (Bernier and Carolus-Duran), there is mention of a separate "working studio," so that the space he actually describes must indeed be viewed as the classic salon studio we know from Malerfürsten like Franz von Lenbach and Hans Makart.

46 Eudel, "William Bouguereau," 263. This does not, however, mean that the author necessarily approves of the art that is made here. For him, a working studio was not an absolute guarantee of artistic integrity. This is indicated not only by the reference to Bouguereau's tendency to produce "a lot, and fast," but also by his comment, on finding the artist's abandoned painter's smock with his légion d'honneur in the buttonhole: "Ah! Ce veston si modeste, si râpé même, a-t-il dû en voir de ces toiles blanches et grises que l'habile pinceau de son propriétaire convertissait promptement en beaux billets de la Banque de France?"

47 Eudel, "Léon Gérôme," 247. The illustration (257) shows an unpretentious if somewhat untidy space, the artist seated in a low chair, dressed in a simple velvet jacket, trousers and slippers, contemplating his work in progress, which, significantly, is invisible to the viewer. The engraving was made on the basis of a photograph, one of the few plates in L'Illustration for which this is known to be the case: as the painter is so busy, and so much time has been lost in waiting around, after being admitted to the studio Eudel asks the artist to pose for his photograph so that he can take his leave. On the use of photography and photographic processes in L'Illustration see exh. cat., Journal universel, L'Illustration, 24.

48 The canvas he is working on appears to be Le Jour (private collection), usually dated to 1881. This is a strange anomaly: while it may indicate that that picture is of a later date, it could also be an invention of the draughtsman or one of Bouguereau's many copies after his most popular works.

75 Eudel, "Benjamin Constant," 424. Judging by the way the artist regards the viewer, this illustration, too, seems have been engraved after a photograph; the overall severity of the image (as compared with Eudel's verbal description of the studio as a decadent harem) may in fact be due the photographic technology and its reproduction.

76 Eudel mentions that both Bernier and Carolus-Duran have second studios, where their creative work takes place but which are closed to the public. These may indeed be "capharanaüm," and their being kept secret a sign of the artist's modesty (or embarrassment at their messiness), but for Eudel this is false modesty. For him – as for Du Pays (see his article on Delaroche: Du Pays, "Delaroche," 165) – the public has a right to view the artistic process and, despite the light-hearted tone, there is a sense of moral outrage that this has not been made possible. See Eudel, "Camille Bernier," 183 and Eudel, "Carolus Duran," 3.

83 Anonymous, "Salon de 1844. Visite dans les ateliers," in: L'Illustration, March 1844, 3-5. The article is anonymous, but the similarity with the views later expressed by Du Pays regarding both Delaroche and the Salon indicate that this article, too, was probably written by him. See also Du Pays, "Delaroche," 165.