PATHOS – the bodies of Christ on the Cross.

In Portuguese medieval art, freestanding wooden sculptures representing Christ on the Cross are among the less studied typologies. For this reason, it is important to discuss and question some of the most representative works of aesthetic values and/or iconographic models that characterised this European production between the twelfth and fourteenth centuries. The option for the Christus patiens typology is justified by the fact that it includes a large number of sculptures, some still requiring analysis and reflection, with the possibility of bringing to light new elements through fresh comparisons or using laboratory-based findings. The examples analysed here demonstrate the existence of artistic models reflecting the importance of foreign formal and iconographic references, which in turn raise the issues of the import and/or reinterpretation by Portuguese sculptors of these ideas, and of the itinerancy of foreign sculptors through Portugal, locating this corpus within an international historiographical discussion.

The "strange" case of the articulated Christ at the Grão Vasco Museum (Viseu, Portugal)

A fragment of a Christ on the Cross (MNAA Christ)

Two examples of sculptures from the 1300s

The "strange" case of the articulated Christ at the Grão Vasco Museum (Viseu, Portugal) 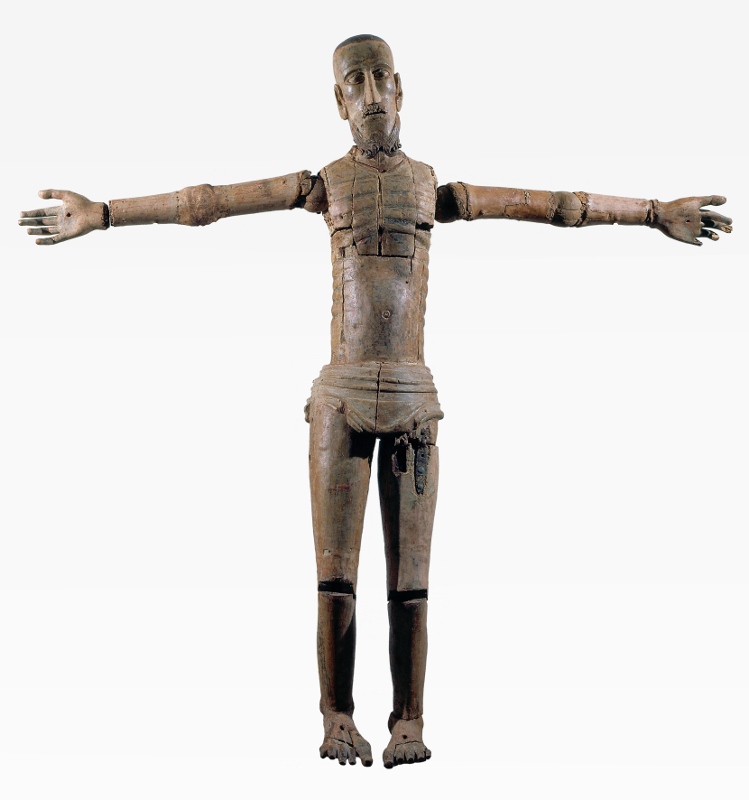 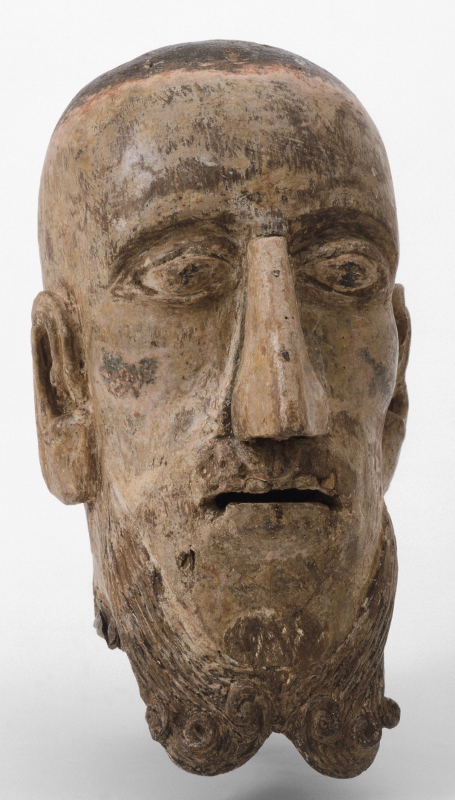 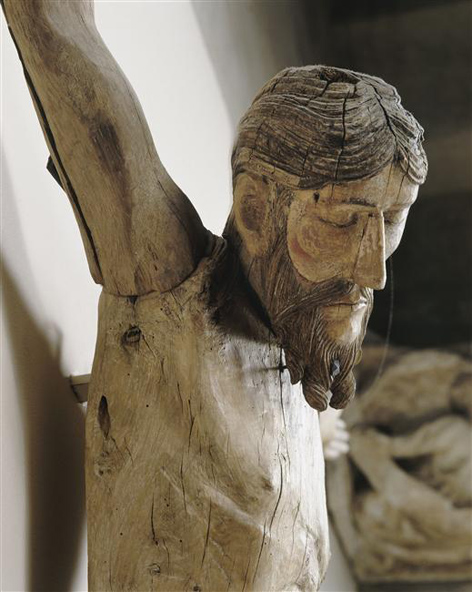 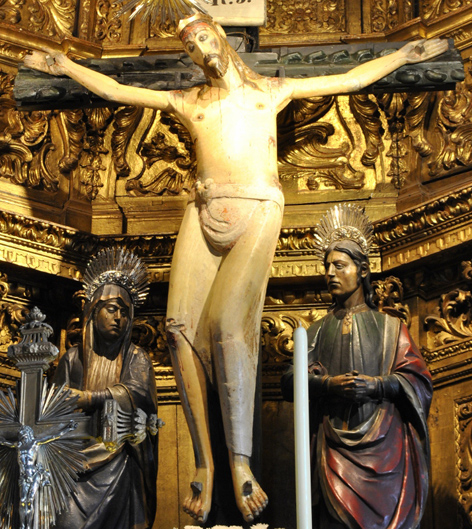 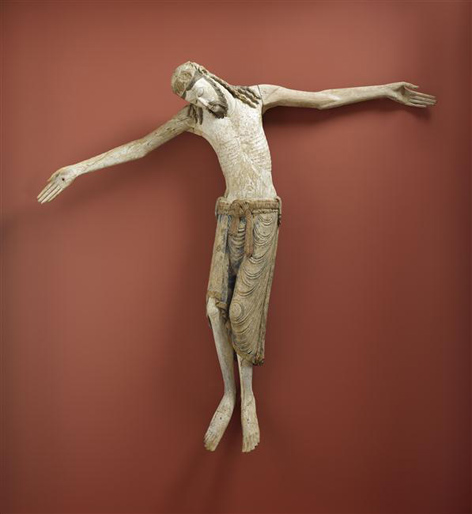 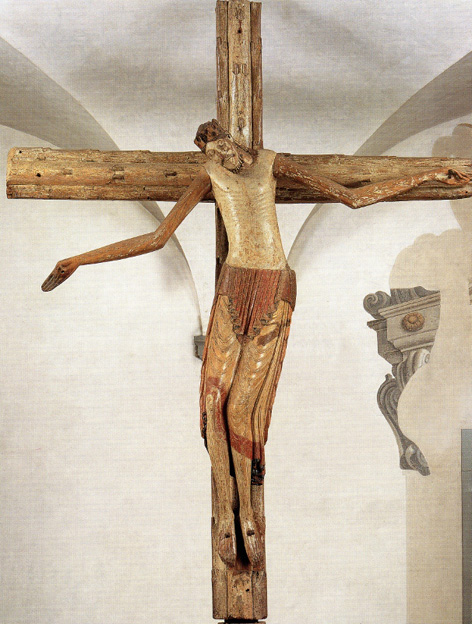 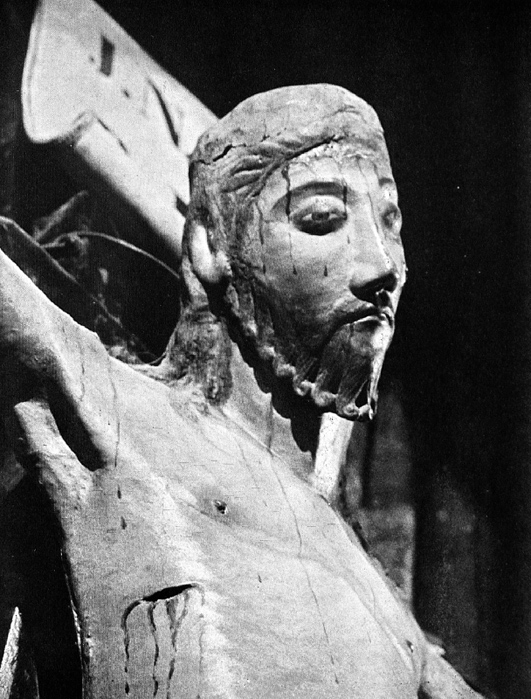 9 X-ray of the head of Bouças Christ (Photo: © Alexandre Maniés) 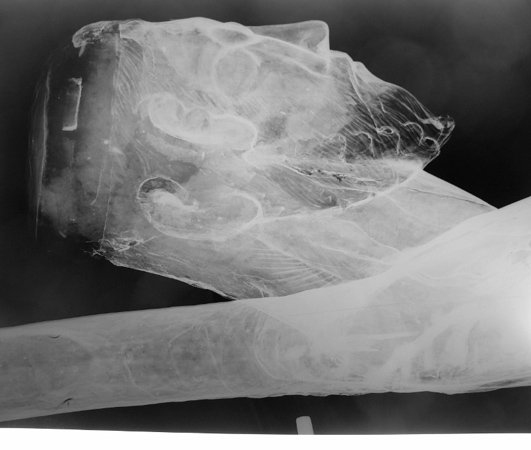 10 X-ray of the head of Bouças Christ (Photo: © Alexandre Maniés) A fragment of a Christ on the Cross (MNAA Christ) Two examples of sculptures from the 1300s 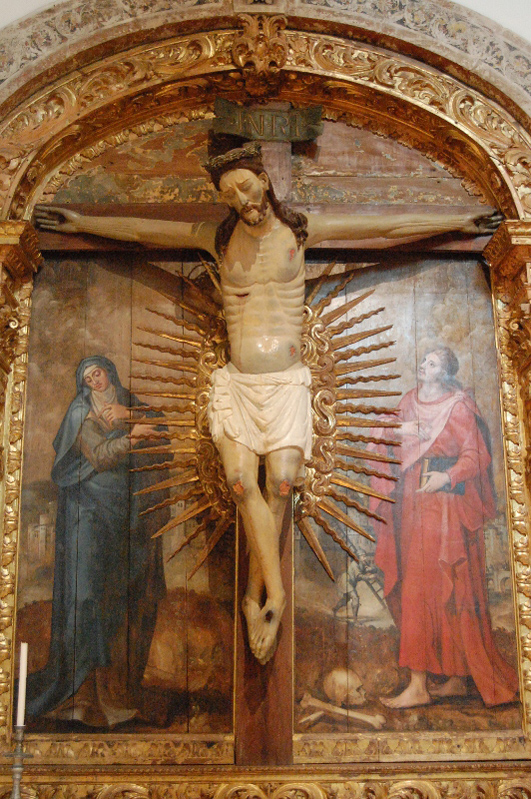 1 This situation has been discussed by several authors, quoting the most recent works: Mário Jorge Barroca, "Mário Algumas iconografias. Cristo Crucificado", in: História da Arte em Portugal. O Gótico, Carlos Alberto Ferreira de Almeida e Mário Jorge Barroca, eds., vol. 2, Lisbon 2002, 180, in which the author mentions that in spite of the documental reference to the existence of Christs on the Cross during the twelfth century, such as the one at the Old Cathedral in Coimbra in 1180; the same absence of items was noted by Pedro Dias, A Escultura de Coimbra do Gótico ao Maneirismo, exh. cat., Coimbra 2003, 46.

2 I am particularly grateful to Manuel Luís Real for sharing with me these unpublished pages in which he identifies and analyses some Romanesque wooden sculptures.

8 Lúcia Maria Cardoso Rosas, "50. Cristo", in: Maria de Fátima Eusébio and João Soalheiro, eds., Arte, Poder e Religião nos Tempos Medievais, A Identidade de Portugal em Construção, exh. cat., Viseu 2009, 198-199. While the author alludes to dendrochronological analysis dating the wood of the object to the thirteenth century, I have been unable to consult such process, as it is not located at the Grão Vasco Museum.

14 Regarding the two sculptures currently found in American museums see, among other titles, P. Verdier, "A romanesque corpus", in: Bulletin of the Cleveland Museum of Art 68, Cleveland 1981, 65-74 and John P. O'Neill and Mark D. Greenberg, eds., The Metropolitan Museum of Arte. Europe in The Middle Ages, New York 1987, 64-65.

20 The report regarding the restoration undertaken by Alexandre Maniés, which should determine whether different wood was used in one of the arms, is forthcoming. Should it be inconclusive on this issue, dendrochronological analysis should be undertaken.

21 Barroca, "Mário Algumas iconografias. Cristo Crucificado", 179-187. Manuel Luís Real considered it to date from the thirteenth century, even though he recognised the existence of many defining characteristics of the previous century (unpublished manuscript, 1986, 177).

25 I am grateful to Diego Guidi, Director of the Artistic Heritage of Pisa, who so readily, and without charge, sent me the images of the Romanesque Christ of the Christ held at Pisa's Museo dell' Duomo published here.

27 António Chinca, "Cristo em madeira da Duomo", in: U. Castelli Barsali, R. Gagetti and O. Parra, eds., História e Obras-primas de Pisa, Firenze 1995, 50. See also Gampiero Lucchesi, Museo dell'Oppera del Duomo di Pisa, Pisa 1993, 33, in which the sculpture is compared with the Courajod Christ, with other objects from the twelfth century, such as the Triumphant Christ held at the Metropolitan Museum of Art (inv. 35.36), with the Deposition at the Isabella Stewart Gardner Museum (Boston).

28 Pietro Toesca, "Un Crocefisso borgognone", in: Belle Arti I (1947), 135-139, had previsouly established this connection, which was then referenced in other studies on the two images. See Antonino Caleca, "I grupi toscani", in: Giovanna Sapori and Bruno Toscano, eds., La Deposizione Lignea in Europa. L'immagine, il Culto, la Forma, Milano 2004, 325.

31 The perzonium model with a fold in the centre, presenting a semi-circular or rectangular shape, pleated or smooth, constitutes, in Iberia, one of the models identified in Romanesque sculpture of the north of the peninsula by Cármen Gómez García, Disposicíon del Paño de Pureza en la Escultura del Cristo Crucificado entre los siglos XII e XVII, Madrid 2007, 319, where, in addition to the examples quoted here, others such as the Áneu Christ, in Manresa, in Ripio, and the 1147 Christ (Catalonia National Art Museum) are discussed. It should also be noted that this is the same typology of perizonium found in the Christ of the bas-relief of Santo Domingo de Silos (Burgos), dating from 1090-1120 (regarding this bas-relief see Elisabeth Valdez del Álamo, Palace of the Mind. The Cloister of Silos and Spanish Sculpture of the Twelfth Century, Turnhout 2012).

32 Lacarra Ducay, "El Cristo de San Pedro de Siresa. Aproximación a su estudio", in: Homenaje a don Antonio Durán Gudiol, Huesca 1995, 483-497. This same figurine, found in wooden statues, can also be observed in small metal sculptures, usually of gilded bronze, and are excellent examples such as the Christ at the Metropolitan Museum of Art (inv. 17-190-760), and another similar object, more rigid in the anatomical treatment at the Louvre (inv. OA7489), presenting similarities in the treatment of the face of the Christ of Cristo de Santa Maria de Mijaran, as noted by Subes, "Le Christ de Mijaran et ses liens avec la sculpture romane d'Erill la Vall et de Ripoll", 20. These two metal Christs are either of French or English origin (Plantagenet domains) and date from the first half of the twelfth century.

33 To Alexandre Maniés I thank the images of the X-rays and photographs of the visible spectrum of the head of the statue (unpublished), fundamental to the arguments presented here. Although the laboratory analysis are still pending, given that they are an integrant part of the M.A. thesis of Maniés, the information he agreed to share with me has been important in the understanding of this work, enabling a more acute questioning based on the images available. Once the full conclusions of the laboratory analysis are known, this statue can be the object of a new study.

34 In what concerns the beard and the moustache, these also recall those of the Romanesque Christ of the Marés Museum (inv. 650), originally made in the Catalonian Pyrenees and the aforementioned wooden Christ held at the Isabella Stewart Gardner Museum, Boston.

35 M. L. Real (1986), not yet using X-rays, identified an Iberian matrix to the model of the beard and moustache of this sculpture – "with parallel, crocheted, hair strands, and an exaggeratedly long hair" – and believed he saw that plaited hair "on the forehead" (in the manner of Erill laVal's Deposition). However, in possession of the laboratory analysis results, and after a full restoration, it is clearly noticeable that the sculptor chose limp hair, in parallel striations, parted in half at the top of the head, a model which, as I have discussed, recalls the twelfth century Burgundian Christs as well as examples from Aragon and Catalonia dating from the twelfth century to the first third of the thirteenth century.

44 Known for a long time as Christ on the Cross, it was only in 1997 (Vítor Serrão, "Tumulária Medieval", in: Santarém. Candidatura de Santarém a Património Mundial II, Santarém 1997, 122), that it became identified as a Deposition.